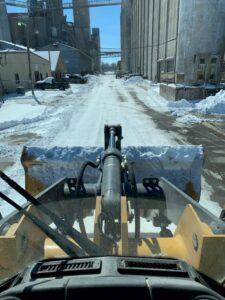 Plowing ahead at Producers Rice Mill in Stuttgart Ark. — photo by Heath Williams

The rice industry was reeling from severe weather in 2020 – the most named hurricanes to hit the United States ever and devastating wildfires out West. Optimists felt the new year would bring better everything, including weather. Two months in, they are sorely disappointed as punishing winter weather pounded much of the country and all of the southern rice states.

Snow, ice and single-digit temperatures pushed civil services to the breaking point in Arkansas, Louisiana, Mississippi and Missouri. Hardest hit was Texas, that was, according to reports, minutes away from a catastrophic power implosion that would have taken months to fix.

Rice mills across the region were down for days for a variety of reasons, but worker safety was at the front of everyone’s mind.

“When weather and natural disasters hit, our first priority is the safety of our employees. In this case the road conditions were a big concern, so we decided to shut our mills down so our employees were not on the roads,” said an official at one company.

“We didn’t want people out on the roads unnecessarily,” said another, “so we decided to shut things down early.”

Treacherous road conditions also meant that even if the mills had been up and running, the well-choreographed ballet of materials coming in and going out just in time was not going to be possible.

“It usually works so well, you don’t think about it,” explained another miller who closed his mill during the crisis. “Rice is delivered, milled rice goes out, bran goes out, but what if the trucks can’t get to you? Everyone’s logistics was impacted like I’ve never seen before. If we had been running, we might have busted the tops off our bins with rice and no place to send it.”

It wasn’t just roads that were affected.

“One example of how unprecedented this past week has been, we had railcars that were frozen so tight to the railroad track that our trackmobile couldn’t budge the railcars,” said another miller.

Many are quick to point out that even if the roads had been clear and employees could have safely reported to work, restrictions from utilities were going to force closures anyway.

“We saw water pressure drop to levels where we essentially had no water because people were running water at home to prevent pipes freezing and bursting. City wells were freezing and we were under boil water orders, so that was that.”

“We received a natural gas curtailment from our vendor, and when I asked what exactly this means, I was told, ‘take it to zero.’ Well, we shut that mill down, of course.”

In addition to no power to run equipment, the facilities couldn’t be heated so pipes, valves, and other equipment started breaking and will need to be replaced across the region.

“These buildings aren’t cut out for 20-degree days,” explained another miller. “And you know our equipment doesn’t run great at lower temperatures either, everything slows down, bran can freeze and choke up.”

The facilities  that have focused on hurricane-proofing as much as possible now will begin taking steps to make operational improvements to minimize disruptions and expenses from future similar weather events.

“We’re looking at being better prepared for snow removal and heating parts of our plants to avoid bursting pipes like we’ve seen the last week,” said one.

With temperatures returning to normal this week, physically digging out will get easier every day, but the losses are estimated to be in the many hundreds of thousands of dollars and it could take weeks to catch up with production.

The phrases “unprecedented” and “challenging times” have been used extensively over the past 12 months, and perhaps even overused, but sometimes those are just the correct words.

“With nearly 40 years in the rice milling industry, I’ve have never seen the operational challenges that we experienced this past week,” said Keith Glover, president of Producers Rice Mill and chair of the USA Rice Millers’ Association.