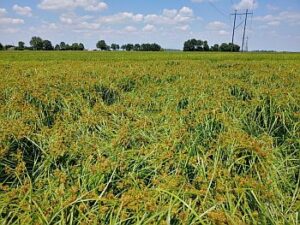 Figure 1. White margin or white-edge sedge (Cyperus flavicomus) growing over and taking down rice in a NE Arkansas field in 2019 — photos by Tommy Butts

Harvest is rapidly approaching, and the majority of folks have put weed control thoughts behind them. However, identifying and assessing late-season weed escapes is a necessity to develop an effective weed control strategy for the next year.

Sedges have really exploded over the past couple of seasons, and identifying specific sedge species escapes in the fall can lead to much improved control the next growing season.

Specifically, a relatively new problematic sedge, white margin or white-edge sedge (Cyperus flavicomus), has really burst onto the scene in several areas of the state.

It has become extremely problematic in areas where it may have been misidentified early and improper herbicide selection led to a lack of control, and in severe cases, complete fields of rice being taken down (Figure 1). 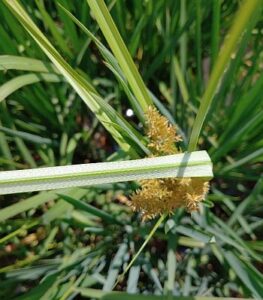 White margin sedge also appears to be a slightly later emerging species, commonly beginning emergence in mid to late May. Young white margin sedge plants have a light-yellow appearance, and the roots are typically a deep red color (Figure 2).

Once bigger (> 6 inches), the undersides of leaves begin turning extremely white while keeping a green midvein (Figure 3); the tops of some leaves may also turn a silver-white color. The base of the sedge plant has an extremely waterlogged, fleshy feeling.

Finally, the seedhead appears almost as if a yellow nutsedge and rice flatsedge seedhead were crossed (Figure 4). 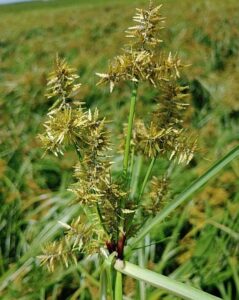 An on-farm preemergence (PRE) study was conducted near Light, AR evaluating nine common rice residual herbicides (Figure 6). At the start of the trial, the site was completely weed-free, and herbicides were sprayed the last week of April.

Bolero (4 pt/acre) and Sharpen (3 fl oz/acre) treatments each provided the best and most consistent white margin sedge control (>85%). Permit Plus (0.75 oz/acre) was the only other pre treatment to provide 80% control or greater; however, control was less consistent with Permit Plus compared to Bolero or Sharpen. 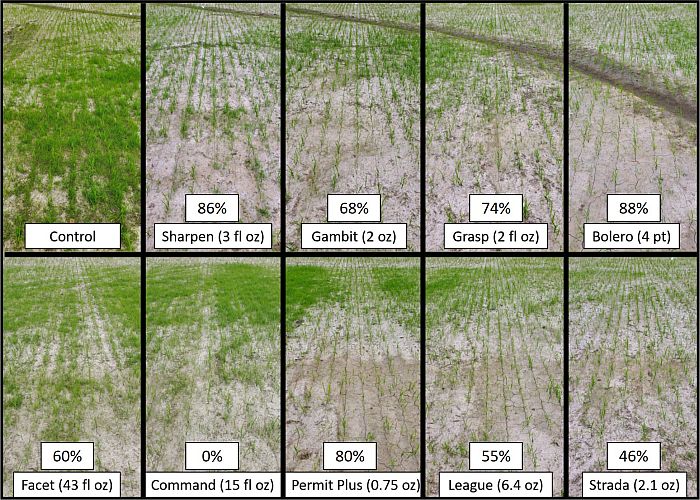 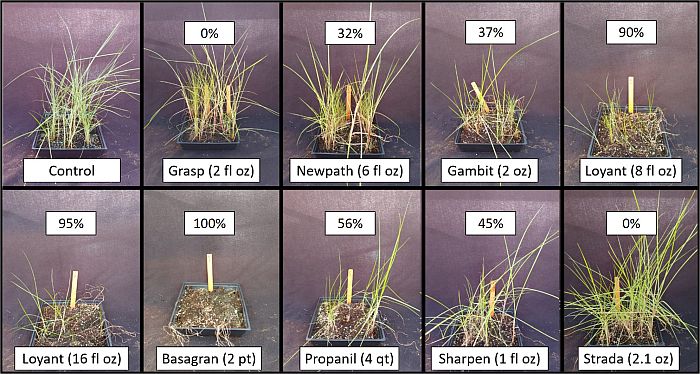 If sedges are greater than 6 inches and/or the population is dense, the rate of Loyant should be increased to the 16 fl oz/acre rate. Propanil (4 qt/acre) and Sharpen (1 fl oz/acre) were the next best POST treatments but did not provide adequate control alone (56% and 45%, respectively).

However, they may be viable tank-mixture options with Basagran to provide multiple effective modes-of-action and heat up the herbicide solution for greater levels of control if populations are large or dense.

Overall, Roundup or paraquat as a burndown, Bolero or Sharpen as a PRE, and Basagran or Loyant as a POST are the best herbicide options for effectively controlling white margin sedge.

RiceBeaux may also be a viable option if densities are low and plants are small as propanil was effective at suppressing emerged plants and the thiobencarb (Bolero) component would add residual to mitigate another flush. As with other weeds, successful management of white margin sedge requires the use of multiple effective herbicide options and applying POST herbicides when plants are small.

Make sure to double-check weed escapes prior to harvest this year and determine whether any sedges may be white margin sedge. Hopefully, these results and recommendations will help to provide a plan for next year to combat this problem weed.

This research was made possible through the support of Rice Checkoff funds allocated by the Rice Research and Promotion Board. More research will be conducted next year to validate these results across years and environments. If you think you may have white margin sedge in your field, please let your county Extension agent or me know as we are beginning to map its distribution.

Please let me know if I can help, and good luck with the upcoming harvest!

Dr. Tommy Butts is a University of Arkansas Extension weed scientist. He may be reached at tbutts@uaex.edu.