How to scout for hydrogen sulfide toxicity

This is a reminder for you to take samples of rice roots from your fields to gauge how much the wet conditions this year followed by the normal permanent flood have affected your rice.

This note is more useful for fields that have a history of hydrogen sulfide toxicity/autumn decline. However, it does not exclude other fields from being scouted.

Farm practices such as fall /winter flooding and no tillage exacerbate anaerobic conditions within the soil profile and the effect level of hydrogen sulfide may increase. Not all soil types are subject to the phenomenon of sulfide toxicity.

Observations have shown that clay loam textured soils are more prone to this problem than other soil textures commonly cropped to rice. Up to 50% grain yield loss may be caused from hydrogen sulfide and autumn decline together. Iron sulfide is usually responsible for root blackening.

Hydrogen sulfide incites root rotting and in the conditions of autumn decline root crowns get blocked by opportunistic fungal growth hindering nutrient and water passage that may cause complete decline/death of the crop.

Please read below to gain information on scouting and management strategies.

Common symptoms of hydrogen sulfide toxicity and autumn decline: You probably see some or all of the following symptoms largely in fields that receive ground water.

1. The growth of rice in bays lags behind those on levees.

2. Lower leaves may start yellowing and form yellow cast in the field (Figure 1) similar to nitrogen or sulfur deficiency symptoms.

3. Rice yellows more at irrigation inlets and in spots with deeper flood and may look patchy across the field.

4. When affected roots are sniffed, they may smell similar to rotten eggs. However, some fields may not produce the rotten egg smell even after the symptoms are evident.

5. Roots in barrow ditches or bays turn blacker while roots from levees remain brownish or white.

6. Black roots when exposed to air for an hour or so re-gain normal root color underlining the importance of air to oxidize the iron sulfide.

1. One should not wait to scout until one or more of the above symptoms are seen. By the time symptoms are detected, undesirable levels of damage may have already been done. 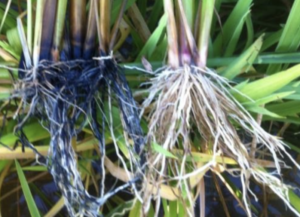 Fig. 2. When rice roots from bay are compared with roots from levee, color differences can be detected.

2. When rice roots from bays are compared with roots from levees, they usually show differences in color if the problem exists as in Figure 2. Wash/rinse roots well before you compare.

Follow through the following questions and answers for further clarity.

Question: When should I start scouting for hydrogen sulfide toxicity?

Question: At what part of the field do I need to scout?

Answer: Usually symptoms are more obvious at irrigation inlets. Start from there. Make sure you wash/rinse the roots thoroughly to compare color differences and comparison should be done immediately after pulling or rinsing.

Question: If I see symptoms two weeks after flood established, should I drain immediately?

Answer: No, you have to allow at least three weeks for the crop to use the pre-flood nitrogen. Follow the DD50 recommended timing for straighthead of rice. That is the recommended timing to drain and dry for hydrogen sulfide as well. .

Question: How long should I wait to re-flood?

Answer: It takes three to five days for new roots to start to grow around the root crowns. Once you start seeing new roots, re-flood. If your field size is big to drain and re-flood in a few days and your water source or pump capacity are low, drought stress may damage your crop more. Therefore, it is your judgment call.

Question: What if I discover the problem after the mid-season at any of the reproductive stages?

Answer: Lowering the water depth or leaving it muddy for a few days may suffice. Reproductive stages are more sensitive for drought stress than vegetative developmental stages.

Fig.3. The growth of opportunistic fungi in root crowns block the passage for water and nutrients from the soil to upper part of the crop.

In the presence of the dark coating and rotting, some opportunistic and weak pathogenic fungi house the root crowns. The growth of these fungi in root crowns hinder the passage (Figure 3) of nutrients and water from soil to upper part of the rice plant to cause crop decline/death.

Question: How do you manage these problems?

Answer: So far, the best practice is to drain and dry as specified above for fields with a history. So the action should be protective. However, if you discover the problem later at any of the reproductive stages, you need to just lower the water utmost to mud for a few days and re-flood. Mind you, the whole concept is to allow oxygen into the soil.

Dr. Yeshi Wamishe is a University of Arkansas Extension rice plant pathologist. She may be reached at ywamishe@uaex.edu.