Mike Salassi, LSU AgCenter vice president for plant and animal science, said the virtual field day was necessary as a safeguard against the coronavirus pandemic. Salassi said rice adds $1 billion of economic activity in the state.

Bill Richardson, LSU vice president for agriculture, said the field day provides farmers and landowners the chance to see how their check-off dollars are spent on research. The Louisiana Rice Research Board determines how farmers’ check-off funding is spent.

“The pandemic is not stopping us from doing research,” Richardson said. “Our research stations have stayed open.”

The College of Agriculture and the LSU AgCenter are committed to diversity.

“We’re here to serve all citizens of the state,” he said.

Richard Fontenot, Louisiana Rice Research Board chairman, commended the AgCenter for continuing its work through the challenging time.

The entire online presentation can be viewed at www.lsuagcenter.com/ricefieldday.

In his video talk, AgCenter rice breeder Adam Famoso said breeding work has continued despite the pandemic. He said 7,500 plots were planted for variety development with 65,000 panicle rows this year on the station and at off-station sites across the state.

A proven line, LA2140, is a candidate for release as a variety. It is a cross between varieties Cheniere and Mermentau with grain quality slightly less than Cheniere. Four years of testing shows LA2140 out yields Cheniere by 5% to 10%. “If it performs well again this year, we will likely release this line at the end of the year,” Famoso said.

Another conventional long-grain line, LA2207, has shown similar yield as LA2140 and similar grain quality as Cheniere. It offers improved disease resistance and has the blast-resistant gene. “This is another very promising conventional line to follow up to 2140,” he said.

The medium-grain line LA2227 is a cross between Neptune and Jupiter varieties and is slightly shorter and earlier than Jupiter. It showed an 8% yield advantage over Jupiter in 2018 and was on par in 2019. It also has the blast-resistant gene.

A Clearfield long grain variety, CLL17, will be released by Horizon Ag next year. It has the blast resistant gene, and its yield is 5% to 8% higher than CL153, Famoso said.

Another Clearfield line, CL2026, has potential as the top-yielding line last year with grain quality similar to CL153. “We will see how this line does this year. It’s another one we potentially might begin purifying this winter in Puerto Rico if it continues to perform as it has in recent years,” he said.

The Provisia variety PVL02 has 15% better yield and improved tolerance to the Provisia herbicide. Its grain is shorter than PVL01, Famoso said.

Four sister lines have been selected in development of the next Provisia variety, PVL03, a cross between PVL01 and Catahoula. A decision will be made at the end of the year if effort on any of the lines will continue, he said.

AgCenter entomologist Blake Wilson used videos to demonstrate how rice water weevil populations on rice plant roots are determined. The counts are made with 5,000 to 6,000 core samples on more than 1,000 plots.

Yield losses of 5% to 10% are common from fields unprotected against the weevils. “Severe case losses can exceed 25 to 30 percent, so farmers must have a weevil management plan in place,” Wilson said.

Wilson also said he will be monitoring the spread of apple snails that are prevalent in the Mermentau River basin. The snails have affected crawfish operations more, clogging traps and, in some cases, forcing farmers to drain their fields.

AgCenter plant pathologist Don Groth said farmers should learn the best rates and timing for fungicides. “We’re probably not going to have any new ones in the near future,” he said.

Farmers should consider disease resistance when they select varieties, but no variety has resistance to all diseases, including Cercospora, sheath blight, blast, bacterial panicle blight and smuts.

Groth said disease is encouraged in his research plots to get an idea of new varieties’ disease resistance. “We do everything we can to cause disease in those plots,” he said.

Fungicide application timing is critical. Treating a field for sheath blight or Cercospora requires application between panicle differentiation and heading, while an application for blast should be done at 50% to 70% heading. Fungicides for kernel smut or fall smut should be applied with a 2-to-4-inch panicle in the boot. But if blast is also important, an application should be done at heading also. After a plant is 50% to 75% headed, a fungicide doesn’t have much benefit, Groth said.

AgCenter weed scientist Eric Webster said he is studying Provisia herbicide rates for PVL01 and PVL02. Injury to young rice plants should be expected when a grass herbicide like Provisia is used.

The variety PVL01 appears to be injured even before the herbicide application, but PVL02 is less sensitive to the herbicide. “It’s just a much better-looking rice,” he said.

Loyant herbicide can be applied with urea fertilizer in a flood, but spraying the chemical is more effective, Webster said. However, applying it with a fertilizer may be necessary on rice fields adjacent to homes or other crops affected by Loyant. “You get less chance of drift and less chance of off-target movement to sensitive plants and ornamentals,” he said.

Less injury from Loyant occurs in south Louisiana because it is applied earlier than in north Louisiana. Loyant has good activity on weeds shorter than 4 inches tall and weeds in a flooded field below the waterline.

Loyant may not kill all weeds, but it will stunt weed growth and make the plants non-competitive for nutrients. “It’s just going to be a learning process for us as researchers as well as growers and consultants getting used to seeing that plant not moving after the time of application,” Webster said.

AgCenter hybrid rice breeder Jim Oard explained how hybrids are developed in ways that are distinct from those of conventional varieties. Pollination for hybrids can be accomplished in small research plots with ropes dragged over the tops of plants or with sticks to hit the plants to dislodge pollen. But large-scale production of hybrids is done with a helicopter, Oard said.

Four Clearfield and five Provisia hybrid lines are being developed and tested in multiple trials. The candidate hybrids show high-yield potential, good quality and lodging resistance. “We’ve made very good progress in moving this material along to commercialization,” Oard said. 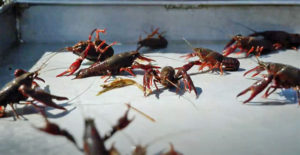 The second-crop field had a crawfish yield of 640 pounds per acre compared to 662 pounds for the field with no second crop.

But the field without a second crop had crawfish earlier when prices were higher, resulting in a $70-per-acre increase in income. But with rice prices at the current level, a second crop that yields in excess of 10 barrels an acre could be more profitable.

“If you can cut more than 10 barrels, it would have paid you to invest in that second crop and just accept that your crawfish crop will be just a little bit late,” Shirley said.

The rice straw in the field with a second crop resulted in lower water quality, and that may be why crawfish production is delayed, he said.

The test, funded by the Louisiana Rice Research Board, will be conducted again this year.

AgCenter rice specialist Dustin Harrell talked about fertilizer applications. The first dose of fertilizer, about two-thirds of a season’s total, should be applied before permanent flood, with the final amount at green ring growth stage.

Preflood application has the most potential for nitrogen loss from ammonia volatilization, but a urease inhibitor can lessen that loss, although it will have no benefit if the fertilizer is applied in a flood, he said.

Nitrogen rates are tailored for different varieties by testing fertilizer rates at locations statewide with various soil types. “We want to see how these different environments play to these nitrogen rate recommendations,” Harrell said.

Rice that lodges in a test is a good indication that a fertilizer rate is too high, he said.

Mike Strain, commissioner of the Louisiana Department of Agriculture and Forestry, said rice farmers should be optimistic. “I think you’re going to see a lot of positive motion for the price of rice across the world,” he said.

Some countries in the Far East are stockpiling rice, he said.

Federal money will be coming to agricultural producers because of the pandemic. “We are anticipating some funds for the crawfish industry,” Strain said, adding it’s possible that rice farmers also could receive federal aid.