Ideas For Central America To Remain A Key Market

Because rice is an excellent basic food in Costa Rica and for many poor countries in the region, quality is important. Consumer surveys show that the three most important attributes are that the rice is uniform, not sticky, after cooking; has a bright, white color; and high whole grain. These quality aspects are more important than the price.

U.S. rice is showing very high levels of chalky grain and chalk instead of translucent grain. Central America is an important market for U.S. rice, but it is threatened by the low quality of the shipments that have been received after 2010. Countries such as Uruguay, Argentina and Brazil that have high-quality rice today have already been placing an increasing volume of rice for Central America to the detriment of imports from the United States.

I know that there is good quality rice in the United States because CL111 was rated at 0.8 percent chalk and CL152 at 0.6 percent chalk using Nicaraguan grading standards. These standards are more stringent than the current FGIS standards.

FECARROZ has submitted a list of recommendations to the USDA with regards to adjustments in grading procedures and the issuance of quality certificates. The rice buyers from Central America would like to see the same procedures that are utilized in the U.S. domestic marketplace applied to the export process to Central America and a more direct involvement of the USDA. We would like to see the definition of chalk broadened within the current grading standards to incorporate “centro blanco” (white bellies) as an aspect of the chalk interpretation.

FECARROZ also requests that USDA conduct quality analyses, primarily for the chalky grains on all shipments of rice to Central America. We are willing to cover this cost to show the difference in the classification of a US#2 that in reality is a #3, according to Central American buyers. As a final step for quality control, these results also could be compared to the analyses performed by technicians at final delivery. 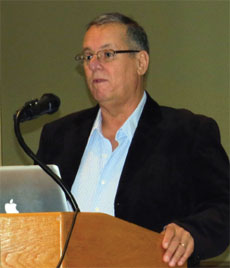 “Consumer surveys show that the three most important attributes are that the rice is uniform, not sticky, after cooking; has a bright, white color; and high whole grain.”
– Carlos González Argüello

FROM SEED TO SHIPPING

• Costa Ricans include rice in every meal.

• Broaden the definition of chalk to include white bellie