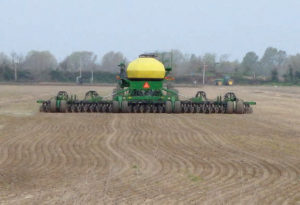 Although Arkansas growers are ahead of planting compared to last year, they’re still behind the five-year average — photo courtesy University of Arkansas

Corn and rice growers were off to a strong start, planting 24% and 13% of total planned acreage, respectively. While the numbers were still well behind the five-year average for those crops at this point in the season, they still made for a marked improvement over 2020, nearly doubling year-to-year progress for mid-April.

The progress data was published by the U.S. Department of Agriculture’s National Agricultural Statistics Service on April 12.

Jason Kelley, Extension wheat and feed grains agronomist for the University of Arkansas System Division of Agriculture, said periodic rains are the No. 1 obstacle to steady planting in Arkansas at this point.

“Some areas of the state have made really good planting progress while others seem to always get the rain that keeps fields too wet to plant,” Kelley said. “Rain Wednesday looked to be light, so I’m hopeful that we can get back in the field within a couple of days and make better progress on corn planting.”

Jarrod Hardke, Extension rice agronomist for the Division of Agriculture, said much of the planned rice acreage throughout the state is ready for planting — even if the forecast isn’t.

“While next week looks cool and dry, we may only get a couple of days back in the field before the next rain is expected,” Hardke said. “A good amount of ground is ready to be planted when we can get to it, so any kind of wider window of consecutive working days will lead to a major jump in planting progress. For now, we continue to hope that window comes sooner rather than later.”

Overall, Arkansas averaged more than five rain days over the past four weeks, about 25% higher than the average established between 1981-2010, according to NASS.