Blast on the upswing in California

I have been getting quite a few questions regarding blast, mostly from Glenn and Colusa counties. It seems that 2020 will be a year with significant blast pressure.

Blast can also affect other nodes in the plant, causing lodging and panicle blanking as well.

The fungicides azoxystrobin and trifloxystrobin (the active ingredients in Quadris and Stratego, respectively), are labeled for blast control. In general, treatments for leaf blast are not recommended.

Leaf blast should be viewed as a sign that the panicles need to be protected with a fungicide application at early heading.

One question I frequently get is whether treatment of leaf blast will help reduce the severity of panicle blast later on.

Unfortunately, I do not have an answer. The fungicides we use to manage blast inhibit spore germination. By spraying for leaf blast, the spore pressure in the field would be reduced.

However, infections that occurred before the fungicide was applied will continue their cycle and will produce more spores. Additionally, blast spores are moved by air currents and can come from neighboring fields.

In this trial, the heading treatment was applied a little too late, resulting in less efficacy than the mid-boot treatment. Application early at 35 days after seeding had no significant effect on blast.

If you are seeing more leaf blast than previous years, a good strategy would be to do a fungicide application at the mid-boot to boot-split stage and a second application at 50% heading.

If economics only allow for one application, shoot for early heading, when 20% to 50% of the panicles have emerged from the boot. Remember that even if you don’t see leaf blast, neck blast can still develop in the field if blast is in the area. 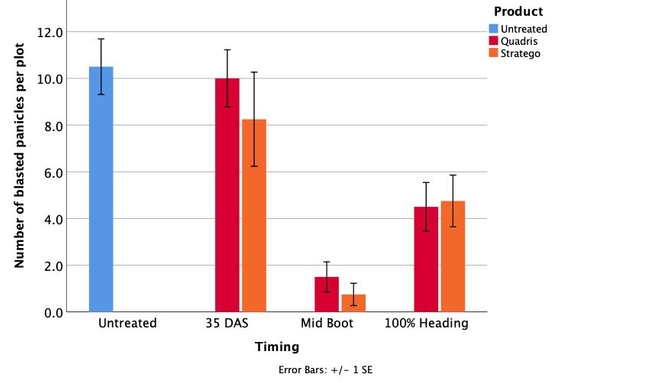 Dr. Luis Espino is a University of California Cooperative Extension rice systems adviser. He may be reached at laespino@ucanr.edu.