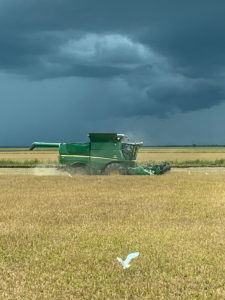 Dark clouds from the outlying waves of Hurricane Hanna — photos by L.G. Raun

Hurricane Hanna made landfall Saturday evening on Padre Island south of Corpus Christi, Texas, as a Category 1 storm with sustained winds of 90 mph. Fortunately, this is southwest of the major Texas rice-producing area west of Houston. While a small amount of the crop had some lodging associated with storm winds, the storm’s biggest impact is on the potential for ratoon or second crop production.

Storm bands dumped significant amounts of rain on some fields that had also received rains a few days earlier. As a result, harvest in some fields happened under muddy conditions, which led to severe rutting by the combines and rice carts. If a field has considerable rutting after harvest, it minimizes the potential for second crop production and often rice farmers will abandon the attempt to produce a second crop.

Almost all the rice fields west of Houston produce a second crop, if conditions warrant. It is estimated that the rutting associated with the hurricane rainfall and earlier rains will reduce the potential ratoon production to 80% 85%, which in turn has a negative impact on the region’s total production.

Approximately 15% 20% of the crop west of Houston has been harvested and, for the most part, yields have been very good. Terry Hlavinka, who farms near East Bernard in Wharton County, reported that 15% of his crop has been harvested and yields are 5% 10% above average. Hlavinka plans on producing a second crop on 100 percent of his acres, if possible.

“In our area, harvest results from farmers across the board have been outstanding,” said Timothy Gertson, another Wharton County rice farmer, who reports that his family operation is about 10% harvested. “Hybrids are yielding mid to upper 60 barrels dry, and these are not one-off fields — everyone seems to have them so far. It’s looking like a ‘bin buster’ crop although I haven’t heard any conventional yields yet.” (A barrel is 162 pounds.)

In the bin just in time

Following the accepted wisdom on second crop conditions, Gertson said, “Second crop potential will be damaged somewhat by these storms because we will all be cutting in the mud next week and hybrid fields may not get shredded. We would like to second crop 100% of our rice acres but may have to abandon some fields that are severely rutted.” 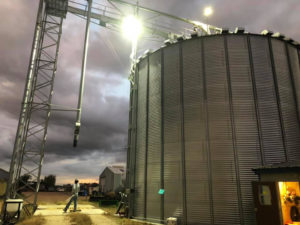 East of Houston, wetter conditions earlier in the season resulted in later planting. Harvest began on a scattered basis and most of that has been hybrids but some CL153 will be ready soon.

Dorsey Jones, a crop consultant with Helena Chemical in Liberty County, does a thorough check on the rice in that region throughout the growing season.

“Most of the medium grain acreage was treated for blast, and sheath blight pressure has built up with recent rains on the long grains,” said Jones. “Stink bug pressure here has been light but weedy rice has become widespread probably because weather prevented summer plowing in those fields last year.”

About 25% of the fields near Raywood in Liberty County will be second cropped. An increase in crawfish production, to 6,000-plus acres, has reduced the number of acres that are second cropped.

“I look at most of the rice in this area weekly and despite a few showers during flowering, I believe we will have an above average crop,” Jones said. “Even the organic rice looks healthier than normal.”