Be Aggressive Up Front

Strategic herbicide choices and application timing early in the season not only provides better control of target weeds while they are small but also maximizes yield potential and quality when harvest season rolls around. Early season weed competition contributes to yield loss in the first three to four weeks after crop emergence.

“The main weed issues we face in south Louisiana are red rice, Amazon sprangletop and Nealley’s sprangletop and the aquatics due to our rice/crawfish rotation,” he adds. “Barnyardgrass can be found in almost every rice field, but it’s not one of our major concerns compared to aquatics like creeping burhead, bulltongue arrowhead, pickerelweed, alligatorweed and ducksalad.”

Webster recommends having at least one residual herbicide in the program early season. The decision to make a preemerge or a delayed preemerge application needs to be made now, he says.

“A lot of our farmers will apply Command up front as a true pre treatment, then at delayed pre or early post on one to two-leaf rice, they will come back with a mix of Command and pendimethalin (Prowl),” Webster says. “We also still use Facet somewhat as a pre up through the early post timing. And if farmers are growing Clearfield rice, then they will go with their first shot of Newpath in the early post treatment. This is a better choice than waiting to target the weeds with what I call a mid-post – a three to four-leaf or even a four-leaf to mid-tiller application. The point is to overlay residual herbicides, especially early in the season.”

The LSU AgCenter weed control guide also emphasizes the importance of understanding the basic activity of the herbicide when making product choices. For example, “If a herbicide has contact 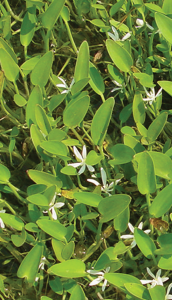 activity, it must be applied to weeds that have emerged above the soil surface and, in most cases, above the flood level….Many herbicides labeled for use in rice have both residual and postemergence activity. It’s very important to take advantage of the entire package the herbicide can deliver.”

University of Arkansas weed scientist Bob Scott agrees that farmers need to be focused on starting off the season with a good foundation preemerge herbicide program in rice.

“Most of the time our farmers make a preemerge application of Command,” Scott says. “However, some also are considering combinations of Command and Facet that can be put out as a true pre. Others who have been using Command for a long time are switching to something like a Prowl and Bolero combination and using that as a delayed pre. Rotating pre-emerge chemistry mainly to address barnyardgrass, but also to take care of all the grass weeds, is another consideration.

“We’ve got a growing barnyardgrass resistance problem to many of our post-emerge herbicides, including propanil and Facet,” he adds. “We have also seen an increase in ALSresistant sedges – yellow nutsedge, rice flatsedge and smallflower umbrella sedge. All of these pests have certain populations that have developed resistance to Permit as well as Newpath and Grasp. Usually rice flatsedge causes the most problems. This is very challenging because we don’t have a lot of good alternatives for sedges.”

“In this instance, farmers are applying RiceBeaux (propanil/Bolero) very early on two-leaf rice,” he says. “Then they are coming back with Basagran and propanil early post or early postflood. It takes a pretty intensive program of RiceBeaux followed by Basagran to take the place of an ounce of Permit when resistance is present. This problem is not as big as the one we have with barnyardgrass, but it is growing. We also have concerns about fenoxyprop-resistant sprangletop. A true pre program is the best defense against the further development of resistant grasses. That goes for either conventional or Clearfield rice.”

Waiting In The Wings

The good news in weed control is that the calvary is on its way in the form of new rice herbicides poised to join the product lineup.

Benzobicyclon, from Gowan, could potentially be one of the first products to hit the marketplace. Webster points out that its mode of action (HPPD inhibitor) is not new to other crops, but it’s new to rice, which means the chance of quickly developing resistance is slim because it’s never been used in rice before.

The Louisiana weed scientist says he likes this chemistry because it provides control of aquatic weeds such as creeping burhead, bulltongue and pickerelweed.

“It’s not good on alligatorweed, but it’s probably the best ducksalad herbicide I’ve ever seen, and it’s excellent on sprangletop,” he says. “The drawback to it is that it’s going to have to be applied in the water as a midseason to late-season application after permanent flood is established. If you apply it on dry ground and can’t get the flood across the field within 24 hours, benzobicyclon will bind to the soil particles. But if you put it in the water and hold the flood, it has what I call fairly decent residual.”

Scott says benzobicyclon’s activity on barnyardgrass and sprangletop will help address some of the resistance problems that Arkansas is experiencing.

“We’re always excited to have new chemistry to work with,” he says. “However, because benzobicyclon has to be applied postflood, it does not have the best fit for all rice production systems.

“For example, benzobicyclon basically has no fit in intermittent flood or row-watered rice,” he adds. “If you can’t hold a flood or have really narrow levees that are difficult to flood, this product may not have the best fit. On zero-grade and some of the larger, leveled fields in Arkansas, it is going to have a phenomenal fit. And it’s going to have a real good fit in California.”

Something else to look forward to is BASF’s herbicide-resistant Provisia Rice System. According to BASF, “it will provide a new tool for post-emergence control of a broad range of grass weeds, including ALS-resistant grasses, weedy rice and red rice. It has been developed through traditional breeding techniques. Registration is anticipated as early as 2016 in the United States.

“The new system is comprised of Provisia seed containing the Provisia trait, which allows farmers to safely apply Provisia herbicide: an ACCase or group 1 herbicide site of action. Although Provisia herbicide will initially control grass weeds, BASF is working on combinations with other herbicides that will also provide control of broadleaf and sedge weeds.”

Scott says the big advantage to the Provisia Rice System is that it gives farmers a rice rotation out of Clearfield that will allow them to chemically control red rice.

“It probably will need to be in a program approach with other herbicides, for other weeds,” he says. “It will not tolerate Newpath, and all the rotation restrictions that Newpath has will still apply to Provisia rice. But it will be a new alternative to Newpath for red rice control. We hope that rotating Clearfield and Provisia will help protect both technologies.”

Another product that will be coming a little further down the line is Rinskor technology from Dow AgroSciences. Scott emphasizes that early trials with this compound look very promising in rice. “It’s very strong on aquatics and broadleaves, and it also has some grass activity,” he says. “We are very excited about this product. Jason Norsworthy, another University of Arkansas weed scientist, has been working with it, but 2015 will be my first year to look at it.

“Since we are developing resistance to all of our rice chemistries, the timing is good for new products,” Scott says. “However, we need to get everybody on the same page as far as resistance management is concerned because none of the new products mentioned here is registered yet. It’s still important for us to protect what we have.”

And while it is exciting to think about new weed control tools that are on the way, it’s time to take care of business in the present.

For now, be sure to focus on making those critical weed control decisions to optimize yield potential for 2015. Remember, you must be aggressive up front.