Growers with resistant weedy rice who planted the first commercial Provisia rice variety in 2018 say the decision was a “no-brainer,” even though they knew it had a slightly lower yield potential.

The alternative would have been either suffering significant yield loss due to herbicide-resistant weedy rice or even worse, not being able to plant rice at all because the outcrosses had overtaken a field.

“So far, it looks really clean,” Dane Hebert, who had about 200 acres of Provisia rice near Maurice, Louisiana, said in late May. “It was so bad in the fields that I put it in that if I didn’t do something, I wouldn’t have had any production.”

He ended up harvesting about 45 barrels (162 bushels) per acre from the main crop, which he was “very pleased” with.

“The milling was off a little bit, but I was just so happy to manage a clean field,” Hebert says, adding he plans to plant it again this season.

His second-crop yield was about 10 barrels (36 bushels) per acre, slightly less than he hoped, but Hebert blamed it on rainy weather during pollination and grain fill.

Clean fields in a grassy year

Hebert’s experience with the Provisia Rice System during the first year of commercial introduction was the norm rather than the exception, says Tim Walker, Horizon Ag general manager.

Yields of PVL01, the first commercial Provisia variety, averaged between 160-170 bushels per acre throughout the Mid-South.

But what caught many growers’ attention was the stellar grass control they experienced during 2018, a season that some old-timers called the grassiest they could remember.

“We definitely think for the dollar when you look at what people spent to control grass with the existing tools relative to what they got with the Provisia technology, hands down, I think it was the best grass control program out there,” Walker says.

Because Provisia only controls grass and is a contact material, he says growers will have to include residuals and broadleaf herbicides in their weed-control programs. Stewardship also will be crucial to maintain the technology.

“We need to steward this technology right out of the gate,” Walker says. “We finally have a tool that we’ve needed for a long time. There are no other tools being talked about at this time of this magnitude.”

Even if you don’t have IMI-resistant weedy rice, Walker says rotating Clearfield rice with Provisia rice will bring in a different mode of action and help preserve the Clearfield technology.

Extension specialists also recommend adding at least one year of soybeans in a three-year rotation to bring in still different herbicide modes of action not registered for rice.

Improved Provisia varieties on the way

Already, the Louisiana State University AgCenter has several experimental Provisia lines with higher yield potential in various stages of development, with at least one — PVL108 — nearing possible release for seed production as early as 2019.

In trials, PVL108 yielded about 10 percent more than PVL01, the current commercial Provisia variety. It also has a better disease package than PVL01.

Like Hebert, Thibodeaux chose fields with some of the worst weedy rice problems to try out the new Provisia system.

“The rice really stools — it has a lot of tillers on it. It’s a beautiful crop,” he said in late May. “If we make 40 (barrels), we’ll be happy. In some of these fields, you’ll be making the same or maybe even more and not having to deal with all of the weedy rice problems.”

A barrel, a measurement of rice in Louisiana, is about 162 pounds.

Thibodeaux says his fields remained clean throughout the season, except for a few escapes around the edges where they couldn’t maintain the water. They spot treated those with a backpack sprayer.

“The field with the worst weedy rice pressure was our cleanest field and had no escapes,” he says.

Yields from his first crop of Provisia ranged from 33-42 barrels (118-151 bushels) per acre. Thibodeaux was in the middle of harvesting the second crop when contacted for this article shortly after Thanksgiving. But he says yields were not that good because of high disease pressure brought on by rains throughout the fall and that was despite the two recommended fungicide applications.

Thibodeaux says they plan to plant Provisia once again in 2019. Based on discussions with their consultant, they’ll use a slightly lower seeding rate and apply slightly less nitrogen to help manage disease.

Two years in the books

Fred Zaunbrecher, who farms with his brothers Bill, Paul and Phillip near Duson, Louisiana, has two years’ experience growing PVL01 for seed. In 2017, harvest was delayed in Puerto Rico, meaning Louisiana received seed later than most seed producers liked.

Concerns about lower-than-normal germination also prompted recommendations to increase seeding rates to about 70 pounds per acre.

Because the new Provisia variety tillered extensively, plant densities were too great and resulted in increased disease pressure from sheath blight and blast.

During 2018, Zaunbrecher says he planted about 50 pounds per acre following the recommended rate of 50-55 pounds per acre. He applied a half rate of Command before planting, then returned with his first application of Provisia about two weeks later.

The weather turned cold, and Zaunbrecher says he saw slight crop injury in one field, but the plants grew out of it as the weather warmed.Walker says seeing a crop response from an ACCase herbicide, such as Provisia, is not unusual when plants are under stress.

What Zaunbrecher noticed is not only did the Provisia pick up barnyardgrass, but it “annihilated” sprangletop.

Their 380 acres averaged 43 barrels, or about 155 bushels, per acre. The 2018 milling quality of his Provisia also was much better than the previous year’s.

Zaunbrecher did not ratoon the Provisia fields, instead putting them in crawfish. He notes a suggestion to avoid second cropping because it can potentially increase outcrossing. 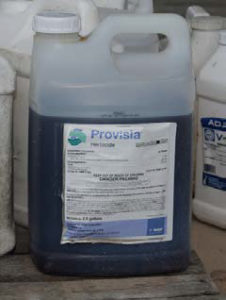 When a new product is launched commercially, small issues that weren’t anticipated frequently crop up during the first season.

Such was the case with the Provisia Rice System, although most were manageable, says Alvin Rhodes, BASF tech services representative for Texas, Mississippi and Louisiana.

“When you have a new technology, you often have to do things a little differently, and the same is true with Provisia,” he says. “We’re all learning about it.”

Among the issues during 2018 was crop response when temperatures dipped below 55 degrees during or shortly after Provisia applications.

“There was more crop response than we expected, and it was amplified where there was overlap,” he says.

Rhodes recommended growers continue with their normal production practices, and the rice soon grew out of it.

This season, he advises not spraying Provisia if temperatures are forecast to drop below 55 degrees during or shortly after the scheduled application.

Within two to three days of the second application, growers should flood their fields. Otherwise, they may see another flush of grasses, he says.

“If they have very large fields that take water a long time to get across, they will have more challenges,” Rhodes says.

The choice of tankmix partners also may affect Provisia efficacy, he says. Adding triclopyr or propanil to Provisia herbicide can cause antagonism and should be avoided, Rhodes says.

But tankmixing Prowl, Permit or Facet with Provisia didn’t appear to cause issues in 2018, he says.

Share
Facebook
Twitter
Linkedin
Email
Print
Previous article
The Farm Bill gets in under the wire
Next article
Would a rice by any other name still smell as sweet?