During a grain bin rescue, fire fighters use a rescue tube to prevent additional grain from flowing around the trapped person. Once the multi-piece tube is in place, they use a rescue auger to remove the grain in the tube.

Prevention is key to avoiding grain bin rescues. Knowing what to do in a bin entrapment emergency also is crucial.

Before Wayne Dulaney’s crew entered a grain bin near Clarksdale, Mississippi, in January, he reminded them of safety measures: wear harnesses attached to safety lines connected to the bin and have one person stay out as a spotter. After all, Dulaney had attended grain bin safety training classes and knew how quickly things could go wrong if proper precautions weren’t taken.

Unfortunately, the crew didn’t follow all of the safety procedures and two workers became trapped up to their chins by soybeans in the bin. But members of the four responding fire departments had received grain bin rescue training, so the story had a happy ending. Nevertheless, fire department personnel spent four hours before the workers were extracted.

As the number and size of grain bins continue to increase, so too do the number of grain bin rescues, says John Hubbard, Mississippi Farm Bureau Federation senior safety specialist.

At the same time, an increasing number of firefighters, farmers and farm employees have received grain bin safety and/or rescue training, resulting in more successful outcomes, he says.

“It used to be when we got a call to go to a grain bin incident, it most likely was a body recovery,” Hubbard says. “Now we have people walking out of it. Firefighters and farmers in the area know what to do.”

To help prevent grain bin mishaps, the Mississippi Farm Bureau over the years has partnered with the Arkansas Farm Bureau, the Louisiana Farm Bureau and other groups to conduct grain bin safety programs for farmers and bin rescue training for first responders.

The Mississippi Farm Bureau also is one of the few groups that has a grain bin rescue simulator where volunteers who are properly fitted with safety equipment are lowered into a small grain container. First responders then practice rescues in a controlled situation, and the volunteers get to feel first-hand how much pressure the grain can exert.

Hubbard says local farmers have been generous and donated the grain involved in most of the simulator training sessions. First-responder training typically averages 30 to 60 participants per session, while Hubbard says some farmer bin safety meetings have topped 200 attendees. Many county Farm Bureaus have also donated rescue tubes, rescue augers and other equipment to local fire departments.

“We have a lot of people involved, and it’s not just Farm Bureau. It’s all of the ag sector,” he says.

The effort paid off the past year as first responders had a successful grain bin rescue in northeast Louisiana, Fontenot says.

Preventing a grain bin accident is still the No. 1 take-home message, since becoming entrapped in a grain bin can happen in a matter of seconds, not minutes, Hubbard says. And workers can become entrapped in slightly more than knee-deep grain.

✔ Before entering the bin, workers should ensure the grain auger is shut off so there is no grain movement.

✔ The person or persons entering the grain bin should always wear harnesses attached to lifelines connected to the outside of the bin. The lines should have no more than a 6-foot fall. That way if the individual is walking across a grain bridge that gives way, he or she won’t drop more than 6 feet.

✔ Never enter a bin alone. A spotter or observer needs to remain outside the bin to shut off power and call 911 in an emergency.

“If something goes wrong, he needs to know what to do,” Hubbard says. “He’s going to find help.”

The spotter also needs to remain calm and not jump in the grain bin to help colleagues. Entering the bin will likely add another person who needs rescuing, and every additional step on the grain tightens the pressure around the trapped individuals.

Fontenot, who has several large bins on his farm and has attended grain bin safety training, follows the rules. His workers need to wear harnesses with safety lines before entering a bin.

“One of the biggest things we do with our guys is we have the buddy system,” Fontenot says. “Before anyone goes into the bins, whether it’s just for a repair or to take a sample or to move the crop, someone has to be around on the outside.”

‘Every rescue is different’

No two rescues are alike and depend on several factors including the grain in the bin. Corn and soybeans behave similarly, while rice is more like walking on concrete, Hubbard says.

“Every rescue will be different, and you’re going to have to weigh each situation differently and react in the appropriate way,” Hubbard says. 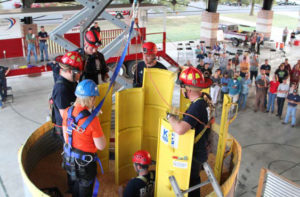 When the first responders arrive, they probably aren’t familiar with the farm and grain bin set-up, so the owner or operator will need to work closely with them throughout the effort.

The actual rescue typically involves erecting a multi-piece metal rescue tube around the entrapped. This will stop additional grain from flowing around the individual.

The fire fighters then insert a rescue auger into the rescue tube to remove the grain from around the individual.

The lack of proper equipment hampered a grain bin rescue in Missouri’s Bootheel in 2009. By the time firefighters cut away part of the bin to drain away the grain, the farmer had passed.

In 2019, the Hayti Fire Department in the Bootheel received $25,000 from Corteva Agriscience’s annual Transform My Community contest to purchase necessary rescue equipment as well as a 10-foot enclosed trailer in which to store it.

It is available to any fire department in the region and can be quickly hooked up to a pick-up truck and towed to the rescue site. In addition, 19 members of the Hayti Fire Department have undergone training from the University of Missouri and are now grain bin rescue certified.

“Fortunately, grain bin rescue is not a real common thing, but when you have a grain bin rescue, you need proper tools and training,” says Glen Whitener, Hayti Fire Department chief. “In our area at this time as far as I know, we’re the only fire department with consolidated equipment. There’s also a generator on the trailer so if you don’t have power, you can still run.”

One of the challenges, Whitener says, is rice creates a much harder surface than corn or soybeans in a bin. He didn’t believe it until a firefighter, who also was a farmer, brought a trailer full of rice to demonstrate. Try as they might, they couldn’t push the rescue tube into the rice.

“I’ve tried to pass the word on about this rice,” he says. “Nobody has addressed the rice issue as far as our training is concerned. We’ve trained with corn and soybeans, which are similar the way they move around.

“One of the dangers with any of the grain, particularly if it was put up damp or wet, is it’s more apt to cake up. Sometimes corn is put up wet as rice is. It looks like it’s solid and all of a sudden, it gives away.”

3 critical steps during an accident

Should someone become trapped in a grain bin, follow these three steps:

1. Shut off the grain flow. This should stop all grain movement.

2. If the individual’s head is below grain level, turn on the drying fans. “Turning the air fans on gives them a chance,” says Mississippi Farm Bureau’s John Hubbard. If the person’s head is above the grain level, do not turn on the fan.

3. Call 911 immediately and do not enter the bin. Keep the individual in the bin calm, since any movement can cause further entrapment.

Print & E-mail
luisiana mississippi missouri worker safety 2020-04-15
Vicky
Previous: How to manage rice with a limited water supply
Next: COVID-19 will test us, but we will not falter