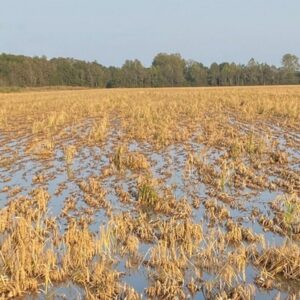 Let me begin by stating that those of us in southwest Louisiana, particularly in the rice industry, have decided we want to officially cancel our subscription to the Hurricane of the Month club!

This past weekend, southwest Louisiana and areas northward felt the winds and heavy rains of Hurricane Delta, which made landfall on the Louisiana coast a few miles east of Hurricane Laura’s path of destruction just six weeks earlier.

Some residents had only seen power returned to their homes and businesses for a few days before losing electricity again on Friday night, Oct. 9. Compromised structures suffered further damage, but one of the most devastating results is in the rice fields where the ratoon crop that was ready for harvest has all but been stripped away from the stalk.

Christian Richard and Allen McLain, both rice farmers in Vermilion Parish, described the damage as “looks like a stripper header went through the crop.”

Delta also brought more rainfall to the area, causing more flooding, including amounts in excess of 12-13 inches in northeast Louisiana. The rice harvest there was nearing the final stretch to completion. But now the uncertainty of Delta’s effects will have to be determined on the remaining rice that was in the field.

Both Supreme and Falcon rice mills in Crowley have reports of minimal damage, but both lost power Friday until Monday. Farmers Rice Mill in Lake Charles was in the middle of Hurricane Laura repairs, and reports damages to newly replaced roofing, as well as having to replace temporary measures such as tarps and metal siding that were still in place for the ongoing recovery efforts.

Kennedy Rice Mill and the surrounding areas of Mer Rouge also lost power but have reported it was recently restored. They will be going through start-up procedures to fully evaluate any possible damages before returning to on-line operations.

Over all, it is difficult in some areas to determine the effects of Delta without knowing what was already damaged from Laura, but it’s not hard to see that the progress made over the past six weeks has been set back.

The recovery process has begun again to try to finish what was going to be one of the better rice crops we have had in several years, only to now be in question for its final assessment following two major storms weeks apart.