County agents with the Cooperative Extension Service, part of the University of Arkansas System Division of Agriculture, will serve as a leading edge in educating Arkansans about potential damages posed by feral hogs and the state’s efforts to eradicate them.

Feral hogs are an invasive species known for damaging both agricultural and wild areas, often denuding areas of native plants, acorns and other food and cover that animals rely on. They are known to host at least 45 animal diseases and parasites. In Arkansas alone, feral hogs inflict an estimated $19 million in row crop damage annually, according to a 2014 study. 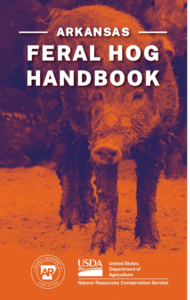 County agents with the Cooperative Extension Service, part of the University of Arkansas System Division of Agriculture, will serve as a leading edge in educating Arkansans about the dangers posed by feral hogs, and the state’s efforts to eradicate them.

The 20-page handbook is an educational tool of the Arkansas Feral Hog Eradication Task Force, which was established in 2017. Material in the handbook was based on publications from the Division of Agriculture and other partner organizations, McPeake said.

The handbook, available in print and online, will also be available through the Arkansas Association of Conservation Districts, Arkansas Game and Fish, Arkansas Farm Bureau and other partnering organizations.

It can be viewed and downloaded at no cost at https://bit.ly/3lxJeXo.

“Feral hogs are destructive to our state’s agriculture and forest industries, and directly compete with native wildlife for habitat,” she said. “They have a high reproductive capacity and can overtake the landscape fairly quickly. It’s going to require a concerted effort among private landowners, government agencies, and conservation organizations to fend off the ever-growing population of feral hogs in the state.”

Populations have been detected in every county in Arkansas and are known to multiply quickly — a sow can produce one to two litters in a year, with four to 12 piglets per year. Because they become sexually active within six to eight months, populations can double in as few as four months, according to the handbook.