Although it’s still too early to tell, delayed planting could shore up at least short-term prices. 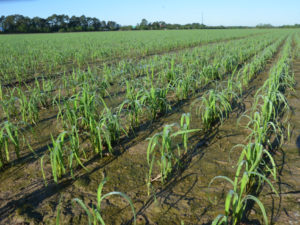 Information coming from the U.S. Department of Agriculture over the past several weeks has been mixed in terms of providing direction to the rice market. USDA’s planting intentions report at the end of March was generally viewed as positive as projected 2018 acres were on the lower end of what many in the market had expected.

With Arkansas being the largest producer of rice in the United States, the acreage projected in that state was a key focus of this report. Although there was some initial concern that plantings in Arkansas might increase to the 1.5 million or 1.6 million acres seen in 2016, the report put Arkansas rice acres at 1.33 million.

This was about a 170,000 acre increase over 2017 but far from the 300,000 to 400,000 acre increase that was once feared and would have likely put considerable downward pressure on prices in 2018. There are still likely to be some adjustments made in total rice acres in 2018 over the coming months, and history would suggest that any adjustments will likely be relatively small.

In those years in which actual rice acres exceeded planting intentions in Arkansas, the increase in acres was roughly 70,000 acres. So even if planted acres for Arkansas were to increase from the planting intentions level, history would say that total rice acres would remain below the levels seen in 2016. Also, with soybean prices remaining above $10 per bushel, there seems to be less potential for acres to move into rice from that crop than maybe once feared. All in all, the planting intentions has helped improve the long-term outlook and should help to limit the downside risk for this market.

Unfortunately, the other reports coming from USDA were not as positive. As expected as a result of lower acreage and production in 2017, the quarterly rice stocks report did show significant reductions in both rough rice and milled rice stocks from the previous year. However, they were at levels that were still higher than many in the market had projected.

This report, along with rice exports continuing to lag levels in previous years, led to the USDA decreasing its projection for total rice use in the 2017/18 marketing year and increasing its ending stocks estimates in its April supply-and-demand report.
Lower supplies and stocks in the 2017/18 marketing year have been pointed to as the primary source of higher prices seen this year.

These reports seem to help dampen that impact. However, despite this latest news, cash prices in Louisiana have been able to remain relatively stable. This is likely a sign that buyers still have concerns about being able to source all of their rice needs with what remains of the 2017 crop. This should help to continue to support prices in the short-term and until the 2018 crop becomes available.

For the next several weeks, the market will likely be heavily focused on the progression of the 2018 crop. Despite adverse weather conditions in some areas, the U.S. rice crop is estimated to be 32 percent planted as of April 15. This is considerably slower then 2017 when 52 percent of the crop was planted at this time but is only slightly behind the five-year average of 35 percent.

Several states have had cold and wet conditions that have slowed planting progress. Arkansas is estimated to be 27 percent planted compared to a five-year average of 33 percent while Mississippi is at 18 percent versus 26 percent and Missouri is at 11 percent versus 20 percent.

Although it is too early to suggest this slower planting progress will have a significant impact on the size of the 2018 crop, it has likely added to the support for short-term prices. Currently, cash prices in Louisiana are around $21 to $21.50 per barrel ($12.96 to $13.27 per hundredweight). New crop bids are reported in the $19-per-barrel range ($11.73 cwt).

While new crop prices being at a discount to old crop prices is not totally unusual, the current cash offers in Louisiana do seem to support the notion of significantly different prospects for short-term and long-term pricing.

What this latest market news does, however, is hopefully tighten the distance between current prices and long-term price prospects. Given the smaller-than-expected acres for 2018 and the overall tightness in rice supplies coming out of the 2017 crop, downside risk for prices would seem to be lower than would have been projected just a couple of months ago. Now, it is conceivable to see prices be more resilient and for them to range in the low $18 to low $20 per barrel ($11.11 to $12.35 cwt) for the 2018/19 marketing year.