Editor’s Note: Last month, Rice Farming published an article titled, “Water for Rice,” which included a short section on the Grand Prairie Area Demonstration Project (GPADP). The following article provides more detail regarding the funding, contracts and progress of GPADP and how it is expected to benefit rice farmers.

According to the US Army Corps of Engineers, Memphis District, “The Grand Prairie Area Demonstration Project (GPADP) is a comprehensive water management plan designed to protect and preserve the Alluvial and Sparta Aquifers. This project also allows the continued irrigation of current agricultural crops and reduces further depletion of ground water aquifers, while continuing to provide critical benefits for the millions of waterfowl, which annually migrate through the region. 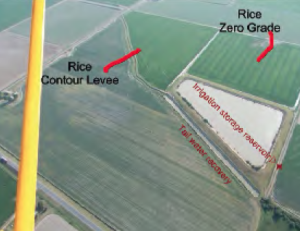 The reservoir for this farm will provide about eight inches of water for the producer. The other foot of water that he will need will come from the pump station. “For all practical purposes, the farmer is using his existing irrigation system,” Carman says. “We are adding to the normal availability of the water. We do not put any water into natural ditches. The water from the pump station will come directly into the farmer’s tailwater recovery system.”

“The project utilizes excess surface water and water from the White River to supplement a network of onfarm tailwater recovery systems. This supplemental system will be used to fill on-farm reservoirs that store the water, which supplies at least a portion of each farmer’s irrigation needs.”

Dennis Carman, chief engineer and director of the White River Irrigation District in Arkansas, says, “Our goal is to have water delivered to the Grand Prairie Region, where we have a significant number of farms, by June 2016. That’s essentially half of the project cost. At this point, we have 250 or more of the on-farm infrastructure investments completed – reservoirs and tailwater systems to capture the surface water and pipelines to distribute water to the farmers.

“About 200 of these on-farm infrastructure investments to improve water quality and irrigation efficiency were done through the main project – GPADP,” he adds. “The other 50 or 60 or so were funded through USDA programs – such as EQIP – and the Mississippi River Basin Initiative.”

Carman also notes that cutting-edge automation will be involved once the project becomes operational.

“We plan to be able to do things like turn on the pumps and motors and measure the water pumped on-farm remotely,” he explains.

Status Of Funding And Contracts
Chief engineer and director of the White River Irrigation District Dennis Carman’s summarization as of April 1, 2014:

“The good thing is that we have over half of the project completed, or we will have it contracted,” Carman says. “So, right now, we are only dealing with the remaining portion.”