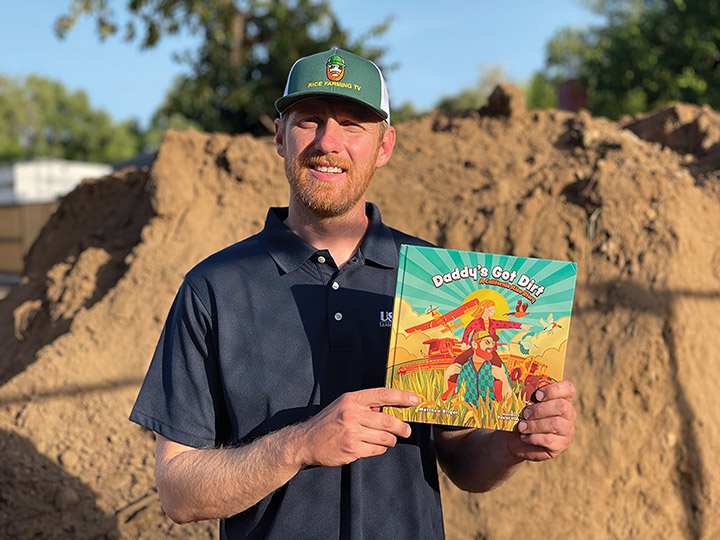 Matthew Sligar always enjoyed the arts while growing up in a farming community, so it came as no surprise this third-generation rice farmer wrote a children’s book titled Daddy’s Got Dirt: A California Rice Story that published in 2020.

After studying literature at the University of California, Santa Cruz, he moved to Prague, the Czech Republic, for six years. While there, he met Clara, his now wife, before deciding to move back with her to an area where they had at least one other family member to help hopefully raise a family someday.

That place ended up being where Sligar was originally from: Gridley, California. Upon returning to the northern California town, he began farming rice year-round alongside his father, George.

“I like the idea of raising a family in quiet Butte County, a small, rural agricultural town where I had a good upbringing,” Sligar said. “I appreciate the values that come with that.”

Sligar began Rice Farming TV, a vlog, in 2016 as a creative outlet for him to capture the scenery he was seeing every day. He said this medium of rice and agricultural literacy was active and well received by the U.S. rice industry for about four years.

The motivation behind the story

His oldest daughter, Elena, now 6, inspired him to write Daddy’s Got Dirt.

“I’ve been reading to her every night since she was born, and I just got inspired by all these different children’s books,” he said. “I was reading to her about ‘cats and hats’ and ‘grumpy fish’, and there was nothing about rice farming that I found.”

Sligar said he dictated into his phone what he thought would be a fun children’s book during rice harvest one year. He conveyed that during spring planting and fall harvest time, the only quality time he was able to spend with Elena was that nightly, 15-minute children’s book read.

“I think that weighed heavy on my mind, too … to somehow convey to her what I’ve been doing all day while she hasn’t been seeing me for several weeks,” he said.

Sligar says the plot of the book covers how California rice is grown, from planting to harvest, the entire growing process being narrated by a young daughter.

Sligar said he sees two main audiences for this book: the narrow audience of his fellow rice farmers and the broader audience of any adult with a young child to whom they want to give a general overview of the California and U.S. rice industries.

“It is a very simple, step-by-step depiction of how California rice is grown, so I hope it helps rice farmers to give an example of what they’ve been doing for their children,” he said. “I think that’s important to show our children what we’re doing in a digestible way for a young child.”

Sligar said he wants the broader audience to learn more about the California and U.S. rice industry.

“The best kind of education is the one where you’re not aware that you’re learning.”

When asked about any potential works coming up the pipeline, Sligar admitted there may not be any in the near future — for good reason.

“With Elena being six and starting sports and our youngest daughter, Stella, who is two and a half, running around… and bossing me around, my hands are super full with the girls,” he said.

While he hasn’t had much time to write anything in the last year and a half for another book, vlog or other creative project, Sligar said he looks forward to when some grandiose bit of inspiration hits him one day.

“Right now, I am enjoying spending time with the family,” he said.

Daddy’s Got Dirt: A California Rice Story can be purchased through Amazon, directly from the Rice Farming TV website at www.ricefarmingtv.com (especially if a note written personally by the author himself is of interest) or even at Sohnrey Family Foods if you’re local to the Gridley area of northern California.

Sligar said writing a children’s book was not easy. But the logistics of all the illustrations and printings would not have been possible without several generous sponsors across the U.S. rice industry that he wanted to acknowledge and thank for making it all possible.