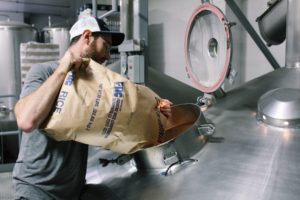 Statistics and the proliferation of brewpubs bear out the rise in hand-crafted beer. A newer entry, Gunrock American Lager at Sudwerk Brewing Co. in Davis, California, has a great backstory.

While rice is frequently used as a cereal in beermaking, it’s taking more of a prominent role in several new beers, including Gunrock. It takes about 600 pounds of rice to make one large batch of Gunrock – equivalent to more than 1,700 gallons of beer.

Brewing with rice instead of barley can create a lighter color and crisp flavor – which fit perfectly with the growing popularity of pale lagers. This is true in the case of Gunrock.

“Gunrock is very approachable and pairs well with almost any occasion,” remarked Sudwerk head brewer, Thomas Stull. “It’s a fun beer to talk about because it has a good story behind it.”

Part of that story is the emphasis on local ingredients. Grower Jack DeWit donates the rice used to make this beer. As a UC Davis alumnus, helping the project made a lot of sense, as a portion of the sales benefit the universities athletics program.

Stull said Jack’s generosity and creativity have impressed those at Sudwerk.

“We’ve worked with Jack in the local Bucks for Ducks event for several years, and he would let us do some creative brewing with his rice,” he said. “Jack is great in being able to facilitate our creativity and also be excited about it.”

Jack has made a lasting impression on many. He and his son, Mike, have welcomed me to their rice fields for countless projects – chronicling the Pacific Flyway migration, covering harvest and have helped with a host of media and social media projects.

He’s one of the few people I know who adhere to the sound Biblical wisdom that “a truly wise person uses few words.” Jack’s kindness has extended to times when circumstances have been far from positive, because he understands the bigger picture; being a champion for rice farming, our communities and amazing environment.

Gunrock’s reach is growing. Later this month, it will be available in larger cans for U.C. Davis Football games.

If you like light, crisp beer, I think you’ll be rewarded when you try it. When you do, please remember the man behind it.