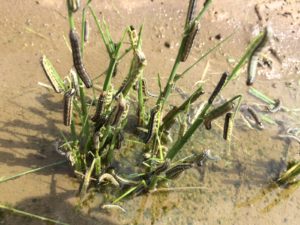 After two years of field and greenhouse studies, University of Arkansas entomologists say they feel confident about recommending against treating most fall armyworm infestations in rice. But they say they want one more year of data before they update the university’s economic thresholds and treatment recommendations.

“We don’t need to get real excited in rice about fall armyworms,” says Dr. Gus Lorenz, an Extension entomologist based in Lonoke. “There’s very little long-term and yield-limiting damage that fall armyworms can cause. I can feel very comfortable based on two years (of research) that I can make a recommendation, ‘don’t spray unless you see something that’s devastating.’”

The exception is if fall armyworms — known scientifically as Spodoptera frugiperda — have eaten three- or four-leaf rice plants completely to the ground. Even then, Lorenz and fellow Extension entomologist Dr. Nick Bateman say, the yield loss was only about 5 bushels per acre.

But they emphasize that defoliation like that is rare, and most fall armyworm ­or FAW ­infestations aren’t nearly as severe.

Not only does avoiding an insecticide treatment save growers money, but it also preserves beneficial insects, such as long-horned grasshoppers, that help control rice stink bugs, Lorenz says.

In with the new

The university’s current FAW treatment threshold is adopted from wheat in the mid-1990s and is based on the number of larvae per square foot.

According to recommendations in the university’s MP-192 Rice Production Handbook, “Treat when six or more armyworms per square foot. Later in the season, treat when fall armyworms are present and damaging the flag leaf.”

Lorenz and Bateman’s goals are to update the treatment recommendations, including potential differences in defoliation response between conventional and hybrid cultivars.

The armyworm research was started by University of Arkansas graduate student Layton McCullars as part of his master’s thesis. It was prompted by large FAW outbreaks that occurred in 2016 and to a lesser extent in 2017.

Lorenz and Bateman have continued the project after McCullars graduated in 2019 to try to refine treatment thresholds.

Field plots of rice were mechanically defoliated using scissors or a mechanical string trimmer at various growth stages and various percentages to simulate armyworm damage and correlate it to yield loss. The treatments included 25%, 50% and 100% defoliation.

Young rice, unless it’s completely defoliated to the ground, tended to regrow with no significant yield losses, the researchers say. As the plants grew, significant defoliation was required before there was an economic yield loss.

“Where we really started seeing major yield loss was at 66% of plant defoliation at green ring,” Bateman says. “That’s two-thirds of the plant eaten back at green ring.”

In fact, the researchers say, they couldn’t force the worms to cause feeding damage to that degree and had to instead rely on mechanical defoliation for the severe defoliation treatments.

What they did notice is defoliation over 50% at the late tiller stage may delay heading by up to two weeks. This, in turn, may push back harvest, complicating a grower’s plans and potentially subjecting the rice crop to late-season inclement weather.

As part of the research, Bateman and Lorenz also are investigating how hybrids respond to FAW defoliation and whether new thresholds may have to be adjusted for those cultivars.