The theme of the 2012 rice-growing season was “early.” Dry conditions enabled many in the Mid-South to get in the fields ahead of schedule. This early planting led, in some instances, to slower-growing rice and extended weed growth, stretching residual pre-emergence herbicide applications to the breaking point and causing many to rethink pre- and post-flood weed control protocols.

The 2013 season looks to be a more typical year. Planting is on track or just slightly behind because of periodic rains. The residual effect of pre-emergence herbicide applications will hold back early season grass weeds like barnyardgrass, sprangletop and broadleaf signalgrass for a few weeks. But Mother Nature is unpredictable, so it’s important to be prepared for anything this year. 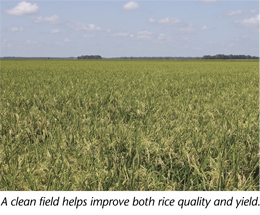 Unfortunately, some preemergence herbicides don’t control broadleaf weeds well and are somewhat weak on sedges. In Clearfield rice, it’s important to tankmix early season applications of Newpath and Beyond with a herbicide like Grasp Xtra that not only picks up the weeds that come through the pre-emergence application, but offers additional residual control of weeds such as barnyardgrass.

It will take you almost straight through to flood in the event conditions change and that extra residual is needed. Tankmixing Grasp Xtra also helps control weeds, including hemp sesbania, jointvetch, eclipta and morningglory, that are missed by early season applications.

No herbicide is perfect. Some are stronger on certain weeds than others. External factors such as weather and field conditions can affect weed control. However, your endgame should be going into flood with a completely clean field.

If your early season application didn’t include a tankmix herbicide that provides added control to weeds that Newpath and Beyond are weak on, consider a second application of Grasp Xtra – at the average or higher rate – to target missed or larger weeds.

On conventional rice acres, you most likely have (or will have) applied a propanil mixture early in the season. In that case, it’s important to make an additional application with a herbicide that will control those high anxiety weeds such as barnyardgrass and rice flatsedge, along with hemp sesbania, aquatics and jointvetch.

If done right, you’ll come out of flood with a clean field. However, most rice-growing states have some grass species that will make it through flood and, in Louisiana in particular, aquatics.

That’s where a post-flood herbicide application comes into play. Look for a herbicide that controls a broad spectrum of weeds common in post-flood rice, including aquatics, sprangletop, coffeebean and barnyardgrass, as well as any broadleaf weeds that make it through flooding. Consider a herbicide with more than one mode of action, such as RebelEX herbicide, if resistance management is a concern. Also think about a wide application window in case weather becomes unpredictable. RebelEX is labeled for application up to 60 days preharvest without causing injury to rice crops.

Whatever Mother Nature has in store for us this year, it’s important to be prepared for changing conditions and plan accordingly.

Choosing herbicides that allow for flexibility and offer a broad spectrum of weed control will keep your fields clean and also help improve crop quality and yield as you move toward the harvest season.