Editor’s note: In the following article, the fields discussed by Ronnie and Michael Aguzzi and Earl Kline are on straight levee, land-leveled ground.

The South typically enjoys an abundant water supply with its many rivers, lakes, ponds and bayous that are an integral part of the landscape. However, in some areas, the water table is declining and underground aquifers do not necessarily translate into an infinite amount of groundwater. As a result, farmers and researchers are working hand in hand to help preserve this valuable resource, while, at the same time, keep rice production viable for many generations to come.

Dr. Joe Massey, an agronomist with Mississippi State University (MSU) Department of Plant and Soil Sciences, says the rice industry has been working for decades on reducing water inputs.

“Some of the on-farm research that we do is fairly standard, while, in other cases, we push the boundaries on ‘How low can we go?’ type work and still grow a nice rice crop and capture more rainfall,” he says. “We’re trying to save water and the energy input – diesel or electricity – that it takes to move water around the field. In agriculture, one size does not fit all, so we work to create different options for our growers, a group that continually refines their practices and are trying to minimize the drawdown on the alluvial aquifer.”

Multiple-inlet irrigation is one approach in which plastic tubing is placed down the side or in the middle of the field. According to the Mississippi State University Extension Service, “Characteristics such as field size and slope, levee pattern, water location, flow and grower preference determine how the tubing is laid out.”

Earl Kline, who farms 3,000 acres of rice, corn and soybeans with his uncle, Warren Satterfield, in Bolivar County, Miss., utilizes multiple-inlet irrigation to put water into each individual paddy rather than transferring it from one pad to another in a regular cascade flood. 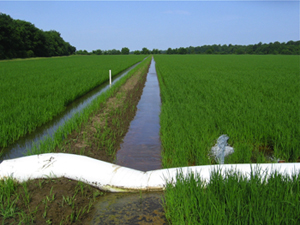 Multiple-inlet irrigation is one of the tools that allows rice farmers to pump up a field quicker, which saves water, energy, labor and time.

“For example, if we have a 40-acre field with five pads in that field, we treat each pad as its own separate field by pumping water into it through gate holes in the plastic tubing,” he says. “By doing this, we are able to control our nutrients and reduce pumping. We can keep the water level consistent across the whole field instead of having deeper water at the top.

“By keeping the water level lower, we can make the rice tiller,” Kline adds. “And the more tillers a rice plant has, the more potential yield it has.”

Logistically, Kline says he can roll out the tubing on a 40-acre field in about an hour and flood the field in 24 hours, which is half the time it takes to water the field using a cascade flood approach.

“That’s where my pumping savings comes in,” he says. “Also, since I am not trying to force the water upward to run over a spill, I can pick the spill up higher and have room to capture more rainfall.”

Massey also comments on intermittent flooding: “Rather than over-pumping to keep a continuous flood, the farmer has a chance to capture any rain that might fall every time the paddy is less than full.”

In addition to utilizing multiple-inlet irrigation, Kline also makes use of intermittent flooding within each paddy in the field. Once the paddies are pumped up, he turns off the well and allows the water level to drop. Usually this happens within the top three paddies of the field until the top portion of each paddy is muddy. He says that data collected on his farm show that yields are just as good on the bottom of the paddy where it stays underwater all the time as they are at the top where the water drops off.

Ronnie and Michael Aguzzi, who are part of a large, rice and soybean family operation called Aguzzi Farms, which is located in Bolivar and Sunflower Counties, also have tried intermittent flooding on some of their big 80-acre fields. 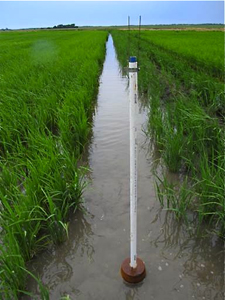 A rice flood depth gauge – installed when the field is at full flood – helps producers monitor their rice flood from a distance.

“We turn off the pump and let the water go down on the top of the field instead of keeping it flooded all the time,” Ronnie says. “In the past, we used to run our wells more, which resulted in using more water. Now, because of some of Joe’s research projects related to irrigation practices, we have fewer cold-water spots and are using less water. Hopefully, the rain will help out, too.”

Michael adds, “The days of leaving a well on 24/7 are over. From a conservation standpoint to your pocketbook, it’s just a bad idea. To me, choosing a method of watering rice depends on the size of the field, field elevation, soil type and the comfort level of the farmer as to how long it will take to get a field pumped back up – the timing aspect.

“We typically let water cascade down from the well, or, hopefully, it will rain,” he says. “Even if the bottom stays full, we may just pump on the top two or three paddies. When those spillways start running, we’ll cut the pump off again. The more that the farmer is hands on, the better it is as far as conservation is concerned.”

In the end, when it comes to watering rice, perhaps Ronnie Aguzzi sums it up best: “No matter which water delivery system you decide to use, water management is still the key component to saving water, energy, labor and time.”

Cooperator/Scientist Rapport Is Based On Commitment And Trust

According to Dr. Tim Walker, Research Professor and rice scientist based at the MSU Delta Research and Extension Center in Stoneville, it all begins with that initial call from a rice grower or consultant saying, “There is something wrong with my rice. Will you come take a look at it?” 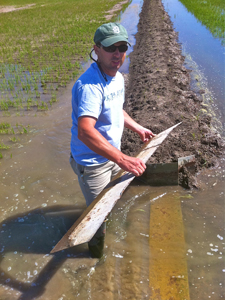 Farmer cooperator Michael Aguzzi installs the partition on one of two metal gates on a one-half mile long levee. He adjusts it throughout the growing season to control the water depth.

Producer Ronnie Aguzzi, who is a member of the Mississippi Rice Promotion Board, says 55 percent of the rice check-off money goes to research to help fund the efforts of scientists like Walker along with Dr. Joe Massey, who conducts irrigation-related research.

“The research they do actually begins with farmers’ needs or problems that need to be solved,” Ronnie says. “The Board wants to fund more applied research – that is, research that can be used out on the farm immediately or in a couple of years. We ask these guys who are out in the field for proposals each year, then we prioritize the projects and fund the ones that we think are the most important.

“My father started growing rice back in the ’50s, and I believe that rice production is where it is today because of the researchers,” he adds. “Our farm has been working with Tim for as long as he has been here.”

Walker points out, “From a research standpoint, about 85 percent of the work that Joe and I do is being done on farmer cooperator fields where the problems are.

“In a normal year, we will have some kind of replicated research or demonstrations on at least 15 to 20 different farms across the Delta wherever rice is grown,” he says. “It takes a lot of commitment and trust for these farmers to believe that we are going to get to their farm and get the job done right.”

Massey notes that it takes a special relationship between the cooperator and the scientist for a project to be successful. “For example,” he says, “it may be a timely phone call from the cooperator a day or two in advance letting me know what he is about to do. To me, that really helps everything go smoothly.”

Producer Michael Aguzzi says, “Working in cooperation with others allows us to earn each other’s trust. I believe that goes a long way.”

Another farmer cooperator, Earl Kline, concurs. “These researchers probably don’t realize the value that I am getting from their work on my farm. I like to be hands on and learn something for myself, too. I can’t put a price on what it has actually done for my rice farm by working with these guys every day.”