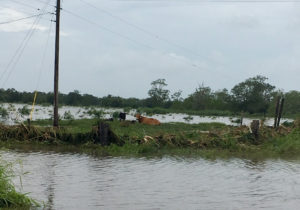 Hurricane Barry had a minimal effect on Louisiana croplands, but its aftermath left a narrow strip of flooding rain that will cause damage.

Some soybeans were flooded, and rice was submerged in areas that received heavy rain. There were reports of lodged sugarcane and some damage to corn.

Harrell said heavy rain after Barry passed through South Louisiana caused most of the damage. Several inches fell Sunday and early Monday around the Oberlin and Ville Platte area and up to Bunkie and Simmesport.

“In those areas there is some rice that went underwater,” he said.

Fields in the affected area have been inaccessible, making it difficult to know how those crops were affected.

“We really won’t know the extent of the damage for several days,” he said.

Harrell said most rice fields were almost ready for draining in preparation for harvest, but later-planted rice was in the flowering stage before the hurricane arrived. Flowering rice plants may have been damaged by the wind and rain, and that will result in sterile panicles with no grain.

He said some rice fell over in fields, but nothing extensive or widespread.

Michael Fruge of Eunice said his earliest-maturing field of 110 acres has about 30 to 40 acres of downed rice. Fruge said he feels fortunate that his rice wasn’t submerged like farmers Jeffrey Sylvester of Whiteville and Richard Fontenot of Vidrine. Sylvester said Tuesday morning that the flooding is the worst he’s seen.

“I’m seeing more water over my crops than I’ve ever seen, and it’s still rising,” he said.

Sylvester said he has 700 acres of submerged soybeans. Much of his rice crop was in the heading stage, and he doubts the crop will survive. But he was scrambling to build levees higher and get pumps operational to move the water.

“Looks like we’re going to be able to start pumping soon,” Sylvester said.

Fontenot said water is 6 to 8 inches from the heads on his rice, so the crop isn’t a loss. But he said the excess moisture will promote disease that will affect the crop. To his surprise, lodging was minimal. Soybeans are another story.

“I can ski in them,” Fontenot said.

Fontenot said his area received 9 to 20 inches of rain Sunday.

“It just came down our alley, and didn’t let up,” he said.

Many of Fontenot’s neighbors are in far worse shape with entire crops underwater, and backwater flooding is claiming more acreage. Several roads remain closed, he said.

Todd Fontenot, LSU AgCenter county agent in Evangeline Parish, said some rice lodged from the Sunday thunderstorms, and some rice was submerged.

“Most of the rice is pretty green,” he said. 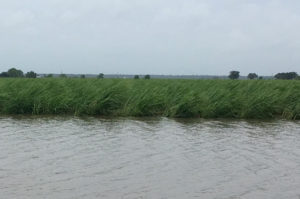 Justin Dufour, LSU AgCenter county agent in Avoyelles Parish, said heavy rains flooded corn in the area. Much of the crop is close to harvest, he said, and flooding will be a problem if draining is slow.

Rainfall in the parish ranged from 7 to 11 inches, but isolated areas received more. Cottonport recorded 19 inches, he said.

Some soybean acreage was flooded, but the rate of drainage will determine how much damage occurred, he said.

Farmer Scott Williams of Avoyelles Parish said some of his corn lodged, but only in isolated areas.

“For the most part, it was standing,” Williams said. “We really feel blessed.”

He said some of his soybeans remained flooded Wednesday, but he wouldn’t have a good idea of the damage for several days.

“It appeared the water was getting off quickly,” Hebert said.

Many farmers started draining their maturing fields ahead of the storm, Hebert said.

Boyd Padgett, LSU AgCenter state soybean specialist, said most of the state’s soybeans appear to be doing well after the storm, except in isolated areas of flooding.

“It just depends on where you are,” Padgett said, adding a grower in the Bunkie area had young beans underwater. “I’m afraid those beans under anaerobic conditions for very long won’t do very well.”

He said humid, wet conditions are ideal for disease development.

Andrew Granger, LSU AgCenter county agent in Vermilion Parish, said about 1,000 to 1,500 acres of rice in the flowering stage went underwater in his parish in the Henry and Intracoastal City areas.

He said about 3,000 to 4,000 acres of sugarcane were left with standing water, but flooded sugarcane did well after hurricanes Rita and Ike. Some cattle were stranded by the storm, he said, so some cattle owners are trying to get their herds to higher ground while others are shuttling hay.

“It could have been a whole lot worse,” Granger said.

Charles Payne, who farms with relatives at the Live Oak Plantation farm south of Henry, said the entire 600-acre crop was covered with storm surge that came in around 9 p.m. Saturday. They were going to start cutting rice Monday, he said.

The Live Oak farmland has flooded previously from storm surge with damaging saltwater. This time, however, the surge was fresh water, he said.

“That’s the only reason our cattle are going to make it,” he said.

About 300 head of cows with calves are stranded on high ground, he said.

Vince Deshotel, LSU AgCenter county agent in St. Landry Parish, said crop failures are likely in some areas, and it’s likely that a disaster declaration will be made for the parish. Crop damage will continue as backwater flooding increases, he said.

He said he received reports of sugarcane twisted by the winds, but it will have time to recover before harvest starts this fall. Some corn stalk tops were broken, but it was not widespread.

“The critical thing is backwater flooding, and how long it stays,” Deshotel said.