Kellogg’s approves Titan medium grain for use in its cereals 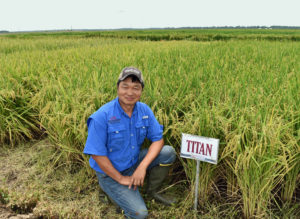 The Kellogg Co. of Battle Creek, Michigan, will now accept contracts for Titan medium-grain for a portion of its 2019 volume of rice for cereal, based on an announcement the company made in December 2019.

Titan is a high-yield, very short-season, medium-grain rice variety released from the University of Arkansas’ Division of Agriculture’s rice breeding program in 2015. It offers some improvements over Jupiter, an earlier release from Louisiana that is a favorite among producers who grow medium-grain rice for cereal markets.

Cereal chemistry is similar to Jupiter, Sha says, but grain size, dimensions and quality are improved. Its milling yield is 59 percent head rice, it has low chalkiness and grain color is whiter than Jupiter.

Titan matures four to six days earlier than Jupiter, he says. It’s a semi-dwarf plant similar in height to Jupiter, but Titan has improved resistance to lodging.

Titan also has better resistance to leaf blast than Jupiter, Sha says. It is moderately susceptible to bacterial panicle blight.

Jarrod Hardke, Extension rice agronomist for the Division of Agriculture, says Titan was grown on approximately 70,000 acres in Arkansas in 2018, which accounted for 40 percent of medium-grain acres.

“It should maintain a similar market share or greater in 2019,” he says.