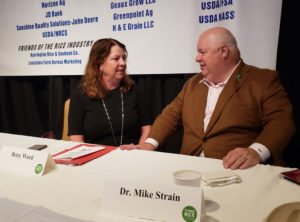 Farmers heard about several optimistic developments in the international rice trade at the 2020 meeting of the Louisiana Rice Council and Louisiana Rice Growers Association recently.

Betsy Ward, USA Rice CEO, said Brexit has the potential to increase sales to the British market without the restrictions of the European Union.

“We’re optimistic we can open that market to U.S. rice,” she said.

China holds 65% of the world’s rice stocks, and the country is dumping the excess on the market, even selling medium-grain rice to Puerto Rico.

“The prices they are selling rice for in Puerto Rico don’t make sense,” Ward said.

An anti-dumping case is being built against China, and two cases were won recently, including one that complained China was unfairly subsidizing rice production.

“I think China will come around, and I think there will be stability in trade with Mexico,” Ward said.

India, the world’s largest rice exporter, also uses unfair trade practices, “and they are just as bad an actor as China,” she said. An unfair trade complaint also is being developed against India.

The trade agreement with Canada and Mexico is a positive development for U.S. rice.

“It’s brought some stability to the market,” Ward said.

A memorandum of understanding with Iraq has been extended to 2021 to buy more U.S. rice.

U.S. Secretary of Agriculture Sonny Perdue is receptive to the needs of the rice industry.

“He’s probably one of the best (agriculture secretaries) we’ve ever had,” Ward said.

Mike Strain, commissioner of the Louisiana Department of Agriculture and Forestry, said trade developments worldwide are going well for American agriculture. “I’m very positive where the economy is going,” he said.

A U.S.-Japanese trade agreement will cut tariffs on American products. Rice is not included in the agreement yet, but administration officials assured him rice would eventually benefit, Strain said.

Other countries, such as Kenya, are approaching the U.S. to make new trade agreements.

China will be buying up to $37 billion in U.S. agricultural products. But some uncertainty is resulting from the coronavirus outbreak as well as two new viral diseases, Strain said.

Funding for dredging the Mississippi River is being proposed, and that has resulted in port expansions along the river, he said.

A rural task force in Louisiana will be studying what’s needed to improve life in the rural areas of the state. A broadband initiative will improve internet connectivity, and the state needs to maintain roads and bridges better, Strain said.

Also at the meeting, advertising consultant Mark Williams detailed an advertising campaign in 2018 and 2019 in north Louisiana. WiIliams, who co-founded the firm that came up with the slogan for pork, “The Other White Meat,” said the radio campaign aired 5,249 ads heard 20 times by the average citizen.

The campaign, “Start with Rice,” used radio ads and billboards, and surveys and statistics showed the project had a significant effect on consumers, Williams said.

Promotional items such as rice cookers were distributed to consumers along the way along with rice samples and recipes. Email addresses were collected to send regular messages with rice recipes.