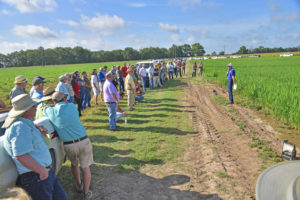 An LSU AgCenter research project at the Mer Rouge farm of Jason Waller was the setting for the northeast Louisiana row rice field day on July 18.

The practice of row rice is gaining new converts because of its potential water savings and flexibility.

The project being conducted by AgCenter agent Keith Collins includes conventional varieties, such as Jupiter, as well as hybrids.

Waller said he started using the row rice method four years ago, growing it on 40 acres next to a continuously flooded field with levees. He said the row rice field irrigated with poly pipe used 26% less water.

Doing away with levees gives Waller options of deciding in the spring what he will plant on different fields.

The row height should be kept to a minimum with a furrow deep enough to channel water, he said.

Collins said row rice research also is being conducted on the Elliot Colvin farm in Richland Parish and the Heath Herring farm in Tensas Parish.

Collins said no fungicide was needed for blast disease on Waller’s farm last year, but he said controlling barnyardgrass has been a problem this year.

Waller has been asked questions about yield variations between the top and bottom of a field. “We’re not seeing one,” he said.

Advantages of row rice include a water savings for most years and no levees. And a crop can be grown on land with a slope.

Studies so far are showing a third application of 100 pounds of urea per acre is needed for row rice, he said.

Most rice fields in southwest Louisiana will be drained soon in preparation for harvest.

Hurricane Barry damaged some rice, but the effects appear to be less severe than expected.

Many fields throughout the state have uneven maturity, and farmers should make fungicide applications based on the maturity of the majority of the crop in a field, he said.

Kernel smut is more of a problem in north Louisiana, and fungicides to address that disease should be applied when a crop is in the boot stage.

Fungicide-resistant sheath blight, a problem in areas of south Louisiana, has also been detected in Mississippi.

AgCenter entomologist Sebe Brown said rice water weevils are most attracted to flooded fields. Most of the injury on row rice fields will occur on areas where water is held the longest.

Using a seed treatment continues to be the best strategy against weevils, he said.

The grape colaspis insect is a threat to rice in north Louisiana, but the seed treatment Dermacor is not effective against it, he said. The seed treatments Cruiser or Nipsit are better options.

Rice farmers should avoid the illegal practice of treating their crop with acephate for stink bugs, Brown said. The chemical was detected in a shipment of rice, and it caused major problems for international trade.

Using cover crops provides an overwintering habitat for insects, and insects thrive after a warm winter such as the one this past year, Brown said.

AgCenter rice breeder Adam Famoso said seed is being produced this year for the new Provisia variety PVL02. The variety has a 10% yield advantage over the original Provisia.

A decision will probably be made later this year on a new Clearfield line, he said.

A partner is being sought to release a hybrid developed at the Rice Research Station.

AgCenter plant pathologist Trey Price said recent rainfall will probably increase the chance of foliar disease issues in soybeans, which may require fungicides depending on the disease. He said he has received numerous calls from farmers whose soybean crop has been affected by taproot decline, a disease often seen in fields where soybeans have been grown continuously.

Rogers Leonard, AgCenter associate vice president, said grower support from a check-off program is essential for AgCenter rice research such as the row rice project. “We couldn’t do what we get done without support from the Louisiana Rice Research Board,” he said.

Leonard told farmers they will benefit from the $1.5 million contribution to establish an endowed chair in rice research.

The rice research program “is as sound as any we work with,” he said.

Leonard also said the AgCenter fared well in this year’s legislative session, and it will allow for the hiring of more researchers.

Melissa Cater, director of the AgCenter Northeast Region, said a search is being conducted for a new entomologist and an agronomist.

China also bought a small amount of U.S. rice recently after years of negotiations. “It’s a step in the positive direction,” Webb said.

Webb said the new law has resulted in one company already making changes to its labels.