If you have ever tried mapping a field with a drone for crop scouting, you will quickly find out that producing an image map of a field requires some amount of work and usually a trip back to the office. For this reason, drone systems have not been fully realized for crop scouting purpose.

Still, several companies have introduced software that takes the live video sent from the drone and parses it into an image map that can be used for crop scouting (although this map will have lower resolutions than the regular drone imagery map).

Currently, the two software that offer this process are Drone Deploy and Pix 4-DFields. We have tested Drone Deploy quite extensively, and the mapping qualities are quite good (Figure 2) in most fields tested. In these fields, differences were accurately represented (although you had to pay attention to camera adjustments and sunlight conditions for best results).

Note that most people have found that drone imagery is best recorded early in the morning (before cloud cover formation and intense sunlight), late in the afternoon (after 3 p.m.), or during solid cloud cover periods (also an ND 8 or 16 filter greatly helps the camera perform correctly in direct sunlight).

Complete systems are not sold yet, but you can construct one by buying the three correct components: drone, tablet and software, and we have spent much time identifying the correct three components to achieve the most from a low cost (< $2,000) drone mapping system.

Based on size, cost, ruggedness and ease-of-use, a system composed of a DJI Mavic Pro, Apple iPad (or Apple iPhone) with cellular capabilities, and Drone Deploy software proved most useful for our purposes (Figure 1). Each of these components (and their relevance to real-time mapping systems) are discussed as follows:

• The DJI Mavic Pro is a small, easy-to-fly drone that is very powerful for its size, being able to cover up to 100 acres of field area per flight (at 400 ft.). The Mavic Pro is also hard to beat because they are one of the lower-cost drones that has very robust electronics (from the Inspire series) and can provide high quality, uninterrupted video at very long ranges (which is necessary for real-time mapping operations).

Also, we were able to fly the drone from inside the vehicle, which allowed the tablet and other crucial components to be cooled by the air conditioner, and allowed easier viewing of the screen. Other drones may be substituted for Mavic Pro (such as the DJI Phantom 4, Phantom 4 Pro or Advance, etc.), but do not use the Mavic Air and similar drones as they do not fly as far.

Note that if you fly from inside your vehicle, you MUST keep the drone with-in line-of-sight and yield to all manned aircraft. You can also use an extra-long charging cable between the tablet and transmitter to allow you to stand outside the vehicle while flying (use the main USB port located on the bottom of the transmitter to make connection with the tablet and completely unplug the other cable).

The only problem we have had with the Mavic Pro is the camera gimbal overloads (from a broken camera gimbal cable). To help prevent this, always use the gimbal clamp when not using the drone (also, the Mavic Pro 2 is coming out which will have a better camera gimbal system, but it only now being supported by the Drone Deploy and other software). 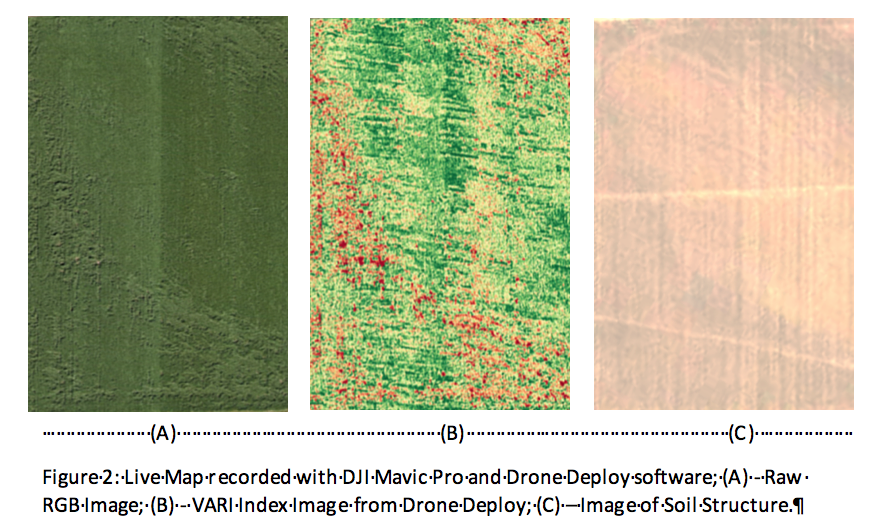 • Drone Deploy is a cloud based software that is very easy to use for field mapping. It does have a subscription fee ($89 per month) for the “Live View” real-time mapping function, but it is one of the lower cost programs we have found. It is available in Android and Apple versions, but only the Apple version will run the real-time “Live View” mapping function (note this function is not supported on Android devices).

This function can be very helpful in crop scouting allowing you to see a finished map while at the field. In addition, indices calculations (although limited) can be performed, but in some cases this process took 5 to 10 minute after landing to complete.

Testing with this system resulted in very good maps (Figure 2) although individual frames sometimes got turned on smaller recorded areas and camera adjustments can have a large effect on the map or indices outputs, leading to interpretation errors (if not careful – putting the camera in manual mode can help prevent this problem). Still, the system worked well and was very useful in allowing a full field image to be created at the field.

• The Apple iPad is the other key ingredient to this system and is needed for the “Live View” function of Drone Deploy. The best system for this purpose was an iPad with cellular capabilities, as the cellular enabled tablets have a built-in GPS sensor that will allow you to accurately locate areas in a field (non-GPS tablets maybe several thousands of feet off).

Other aspects of the Apple tablet and iPhones are that the Apple IOS connects much easier to drones and different software than the Android devices. A disadvantage though is that they easily overheat in direct sunlight, turning off during flight (which can be quite unnerving). Mounting the tablet in an air-conditioned vehicle solved this problem (also the Mavic Pro also has a separate screen on the transmitter to maintain monitoring of the drone if the tablet goes off).

Using these components, a farmer or consultant can construct a system that will produce a real-time map of field and testing has proven adequate and useful maps (although blemishes may occur due to shadowing from cloud cover and other camera changes).

Note that Pix 4D also offers a similar program called “Pix 4D Fields” and may fit some producers purposes better. An FAA Part 107 UAS operator’s license is needed for commercial use but may be easier to obtain in the future (since recreational fliers may also be required to have the same license).

Dr. Randy Price is an Agricultural Engineering with LSU AgCenter that evaluates new farming technologies. He may be reached at rprice@agcenter.lsu.edu.