Richard Fontenot, who farms with his brother, Neal, near Ville Platte, La., looks at the Louisiana Master Farmer Program as an integral part of their operation’s succession plan.

“It enhances some of your conservation efforts and allows you to be a little bit more aware of all of the things you can use to build something that’s sustainable,” says Fontenot, a fourth-generation rice, soybean and crawfish producer. “We felt this was a good way of protecting our resources for the next generation.”

Even before the program, the Fontenots had been doing some no-till and modified their pipe drops to reduce erosion. But Richard says the program opened their eyes to practices they weren’t familiar with.

“It just broadened our scope of what can be done and helped identify resources and also concerns that we just didn’t recognize at the time,” he says. “It helped us enhance our current practices and employ new ones.”

A Voluntary Approach to Water Quality

The Master Farmer Program had its roots in a 1996 Total Maximum Daily Load lawsuit against 38 states, including Louisiana, and was developed as a voluntary approach to address water quality concerns, Girouard says.

But it goes beyond just water. The program is designed to give producers the tools they need to continue farming and ranching with an eye to the environment, he says. It also helps them develop and implement research-based best management practices and farm-specific conservation plans. 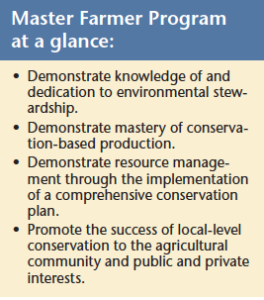 Growers who complete the Master Farmer Program and receive certification are presumed to be in compliance with state soil and water regulations.

A Matter of Pride

Participation varies around the state, depending on commodity and existing Master Farmers who actively encourage colleagues to become certified, Girouard says. In Vermilion Parish, for example, 30 producers have become Master Farmers.

Mike Perry, NRCS district conservationist in Abbeville, Vermilion Parish, attributes the region’s high level of participation to pride. “That’s their goal — to be a Master Farmer,” he says.

Water quality and soil erosion are two of the top resource concerns in the parish, and the Master Farmer Program addresses those. But it offers other benefits as well.

“There’s that old saying, ‘Conservation pays,’” Perry says. “So it becomes an economic thing, also. It pays off financially as well as with conservation benefits.”

But his job — and that of his colleagues throughout the state — is to help producers design customized resource management programs.

“We develop the plan with them and there’s a lot of field work with them,” he says. “Once the plan is developed, it’s that producer’s plan, and we go over it with them. And until it’s implemented, we’re with them all the way.”

Only after the plan is implemented can producers be certified as Master Farmers.

Continual Improvement
Each January, those producers achieving certification the previous year are recognized during a luncheon ceremony held in conjunction with the Louisiana Association of Conservation Districts state convention.

For producers to maintain certification, they must earn six hours of approved continuing education annually.

Fontenot says he and his brother are diligent about attending continuing education and continually look for ways to enhance their conservation efforts.

Producers also must recertify every five years, which involves ensuring the continuing education requirement is met and updating the conservation plan to reflect ground that has been added, has been let go or is no longer farmed.

The curriculum has evolved since the program’s inception to recognize new conservation practices, programs and regulations as well as grower input. Until 2014, for example, the class and field tour were held during separate times of the year.

Based on grower input, Girouard says the program combined them into the two-day Master Farmer University, beginning in 2014. The first day addresses general conservation practices — such as soil testing, spill prevention and nutrient management — in a classroom setting.

During the second day, producers are separated for commodity-specific field tours because conservation practices used in cattle or sugar cane may not be applicable to rice, and vice versa.

The program also has moved away from single model farms to demonstration farms, where participants visit two or three operations and view specific conservation practices under different conditions. This format is conducive to interaction among participants and farm hosts, sharing of ideas and generating more discussion, he says.

“They visit with the (host) farmer and move on,” Girouard says. “Even that moving attracts more attention, and it creates more interest in the program. Farmers get to see more and visit with the farmer, and the same practices can be implemented in different ways.

“One of the most effective field days we have is with the cattle producers, and those are the pasture walks. There’s more rubbing shoulders than sitting in the classroom. It’s live.”

To learn more about the Master Farmer Program, visit http://bit.ly/1RmTyPV.