Men With A Plan: Bootheel Missouri rice producers farm by what pays 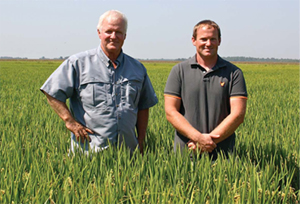 When Chris Berry began farming with his father, Ronnie told him that he had two rules. “Don’t rent any scrap ground and farm by the pencil. Farm by what pays.” Ronnie originally started farming with his brother, Richard, and they followed those same rules for many years.

“I like CL111 because it’s been good to us, even through all the different weather patterns that we’ve had, ever since we began planting it,” Chris says. “It seems as though the weather goes from one extreme to the next each year. But with CL111, the yield is still there. It’s not an erratic yielder. When you do have an erratic yielder, it’s hard to figure costs and inputs and where you need to make marketing sell points.

“CL152 is a good yielder, too, and it was the variety of choice that we grow that the Central Americans indicated that they like,” he says. “We’re hoping that they will start buying this rice identity preserved (IP) and offer a premium for it. The Central Americans have made several trips up here and are beginning to learn more about the varieties. That’s one thing that I recommended to them. The best thing that they can do is to know more about the U.S. varieties so they can be more specific about what they want. Then we can work with them on that goal.”

“We already IP our medium grain rice for the cereal companies,” Ronnie notes. “And we have increased our onfarm storage to about 413,000 bushels. That should give us enough storage to IP our other varieties as well.

Other practices that have increased efficiency and profitability on Berry Farms include converting to track machines and harvesting their rice in a circle.

“The reason we made the switch to track machinery goes back to when I was a kid,” Chris says. “I always worked on the farm and spent day after day and night after night working ground by disking and landplanning. I always thought that there has to be a better way than this. Once I got involved and was farming some on my own, we purchased some track combines and saw that they would stay on top of the ground in wet conditions.

“I bought a set of tracks for a grain cart, and just went from there,” he adds. “The year before we got the track grain cart is that we burned all of our rice straw on a hard freeze one winter, and I had to work several fields that next spring only because of the ruts where the grain carts ran. Once I put the grain carts on tracks, I saw that we needed to switch the rest of the machinery to tracks so we don’t tear up any ground.

“For example, when we finished harvesting soybeans this year, we already had almost 2,000 acres of ground ready to plant rice because we didn’t tear up the fields. All we did was take two big track tractors pulling Kelly Diamonds and made one trip across the bean fields. We sprayed the fields, ran the ditches, and we’re ready to plant rice.”

Although switching to tracks does save a ton of money on fuel and labor, the time factor was the most important issue, Chris says.

“We always had a time issue because we would spend all spring working ground when we needed to be planting,” he explains. “Your planting date always sets your yield. That alone was one of the big reasons we made the decision to go to all tracks. We also noticed that we can pull a lot bigger tools and implements with not near as high a horsepower tractor by using a track tractor. They are more efficient in the field.”

Harvesting Rice In A Circle

Ronnie and Chris cut the majority of their fields in a circle. They measure the longitude and latitude of the field on an iPad, then plug it into the autosteer on the combine. The combine then drives to the middle of the field.

“At that point, I can put it in circle mode, and we’ll just start cutting in a circle from the inside out,” Chris says. “That way, my auger is always out so I can unload it at anytime, and the header is always in the grain harvesting, except for the one pass for the carts to run in and out from the circle. The carts always know where to go and can always get to you. It eliminates the dead time.

“Every year I pencil in what the rice on the levees will make and the time that it saves us not planting the levees and tearing them down before we harvest,” he says. “Every year, the time far exceeds the rice you will get off the levee for what it costs to harvest in the fall if you figure the combines, the carts, the tractors and the big trucks. This doesn’t even include factoring in the risk of a storm taking out a lot of your crop.”

“We’ve always tried to farm by what pays,” Ronnie says. “Instead of just doing things the conventional way, we try to do what’s necessary. It’s really speeded up our operation.”

The aerial photo above is of Berry Farm, where Ronnie Berry was born and raised. It hangs in the hall of what was once his home and is now the farm office. Other photos adorning the wall were taken by his mother, Mary Alice Ahrent Berry.

“My mother was the school principal’s secretary, and every morning before leaving for work, she would fix my dad, Basil Berry, and me a full course meal and put it in the refrigerator for lunch,” Ronnie says. “After school, she would ride around the farm taking pictures of us working in the fields, the cattle, the crops and sunsets, using just a little instamatic Kodak camera. Then she would send them off, have them enlarged and hang them on the walls. Most of the time, we didn’t even know that she was taking photos of us. I still have that camera. It was just a cheap, little thing, but it took great pictures.”