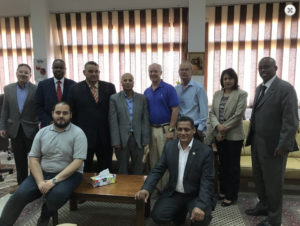 Representatives of the Missouri Rice Research and Merchandising Council and Southeast Missouri State University recently traveled to Egypt to discuss the potential for shipping Missouri paddy rice to Egypt and collaborating on rice breeding and agronomic rice research with the Egyptian Ministry of Agriculture.

He says Egypt grows rice, but with a population of 100 million and with 1 million births every 10 months, the country cannot meet their demand. Because southeast Missouri is a major producer of medium-grain rice, which Egypt prefers, this region could help shore up that need. Egypt would join a list that includes Mexico, Latin America, Morocco and the Caribbean as international locations receiving Missouri rice.

“We believe we will be very successful in the future export of Missouri rice to Egypt with subsequent re-exporting to other adjacent nations,” Aide says. “We believe that collaborating with our Egyptian counterparts in agriculture research will establish a sustained research program that will serve both the United States and Egypt.”

Aide and Greg Yielding, Missouri representative for the U.S. Rice Producers Association, met with the chief executive officer of the Muffaddal Group, representing Egyptian grain traders and processors; an official with the Fresh Fruit Co. Egypt Ltd. who also serves as an Agriculture Export Council board member; and Al Walily and Unicom Group, grain traders and processors.

The discussions focused on the potential for Egypt to import Missouri paddy rice for local milling that subsequently could be shipped across Egypt and re-exported as polished rice to Sudan, Libya, Syria, Lebanon and Iraq.

Yielding and Aide also met with U.S. Department of Agriculture Foreign Agriculture Service officials at the U.S. Embassy to review these meetings and outline future plans. While at the Embassy, the two also met with the general manager of ADM-Germany and the chief executive officer of Egypt’s Mitchell Shipping Co.

The trip, funded by the Missouri Rice Research and Merchandising Council, also included meetings with grain traders and processors and visits to rice production fields and processing facilities.

A meeting with the president and director of the Egyptian Agriculture Research Center, the deputy director of Field Crop Research and the director of the Field Crop Research Institute resulted in conversations to possibly explore the drafting of a memorandum of understanding between the Egyptian  Center and the Missouri Rice Research and Merchandising Council. The talks centered on developing collaborative research involving rice breeding, salinity abatement, furrow-irrigated rice and other agronomic studies.

If this opportunity would mature, the USDA Foreign Agriculture Service would assist in identifying funding programs and coordinating these efforts, Aide says.