In severe infestations, armyworms can cause yield losses of 4-12% — photos by Luis Espino, UCCE

Armyworms can be a serious pest in rice as the larvae can eat the rice leaves or panicles and cause yield reductions.

In 2015, a severe outbreak of armyworms caught California rice growers by surprise, resulting in yield losses. In a 2018 survey conducted by University of California Cooperative Extension, rice growers reported average yield losses in 2015 ranging from 4% to 12%.

To safeguard the rice crop against the pests, UCCE began conducting areawide monitoring of armyworms in 2016 using pheromone traps that attract the moths as they fly around rice fields. The traps are set up in 15 locations of the Sacramento Valley from Richvale to Knights Landing and in three sites in the Delta, covering most of the rice production area of California. The traps were set up early in the season and checked weekly until fields were ready to harvest.

“Moth numbers are delivered to more than 1,500 growers and crop consultants weekly via email, so they have a warning system to know when populations are increasing and when to start scouting closely,” Espino said. 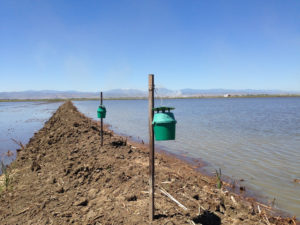 “Treatments are not always needed, but armyworm damage can occur quickly and monitoring needs to be increased during the periods of peak moth flight.”

During periods of peak flight, the UCCE advisers provide growers with information on how to decide if a treatment is needed.

The information from the armyworm monitoring network, together with efforts by the rice industry to register insecticides that are effective at controlling armyworms, has resulted in better control of the pests and less yield losses.

The University of California contributed this article.