Drying and storing rice on the farm can be an excellent marketing strategy. The way that rice is handled during the drying and storage process will determine its quality at the point of sale, thereby influencing its value. Rice should be quickly dried down to a moisture level of about 12 percent for storage, especially if it is going to be stored for several months. The reduction of grain moisture is done by passing relatively large quantities of dry air over the rice after it is placed in the bin. The quality and quantity of this air determines the final moisture content of the rice kernel.

Monitor EMC Carefully
In drying rice, maintaining a steady EMC as close to the target storage moisture (12 or 13 percent) content is important. Usually, there are many days during and shortly after the harvest season when the EMC is at or below the desired level without adding any heat. At night or during damp weather conditions, it may be necessary to add some heat to condition the air to a desirable EMC or to maintain the same level available during the daylight hours. If heat is not available, it may be better to turn the fans off at night instead of pumping in moist air. Moist air that is pumped in at night has to be removed later. This increases drying cost and may result in significant head rice yield reduction. Fans should be turned off almost any time the EMC of the air is greater than that of the grain. The exception might be for very damp rice to avoid heat buildup.

A given volume of air has the capability of holding a given amount of moisture. That amount will depend on the quality. One way to increase drying potential or cause the grain to reach equilibrium with the air sooner is to pass larger amounts of air over the grain. Doubling air flow typically cuts the drying time in about one-half. Airflow rates for drying vary from a low of 1 cubic foot per minute (CFM) per hundredweight (cwt) to a high of 100 or more CFM per cwt. Recommended minimum airflow rates for different moisture contents are:

Drying Fans And Stirring Devices
The grain drying industry offers basically two types of drying fans – the centrifugal and axial flow fans. From these two types, manufacturers provide a number of variations to meet the needs of field applications. The two critical characteristics of fans are flow rate (CFM) and static pressure expressed in inches of water.

Stirring devices help to mix the upper and lower portions of grain in the bin. This speeds up the drying process and loosens the grain so that additional air may be moved up through the grain. Stir-alls and similar devices should not be turned on unless the bottom end of the auger is about one foot deep in grain. They can run almost continuously after that point, when the drying fans are running.

Many producers are concerned that these devices may grind away at the rice if left on, but there is no research evidence to support this claim. A small amount of flour-like substance will form around the auger top, but the small particles were most likely already there and are just being gathered in one place with the auger action.

Grain should not be allowed to cone as the bin is being filled. If coning occurs, the large particles will migrate to the outside, and the flour-like small particles and trash will remain at the center of the cone. This results in a very uneven airflow through each portion of the grain bin. Most of the air will pass up the outside of the bin through the larger and cleaner grain. A level height should be maintained through the filling process. Once particle separation occurs, it is hard to correct even if the bin is later shoveled level.

Air temperature is important when drying rice. When air is being pushed through deep depths for prolonged periods of time, the air temperature should not exceed 105 degrees F. If higher temperatures are used, the rice kernel can be overheated, resulting in low milling characteristics. Commercial dryers can use much higher air temperatures than on-farm dryers because the rice is subjected to heated air for shorter periods of time. Rice can be successfully dried on the farm, but different management techniques are necessary than when drying commercially.

Identifying On-Farm Drying Issues
Some of the main causes of problems that occur with on-farm drying are: 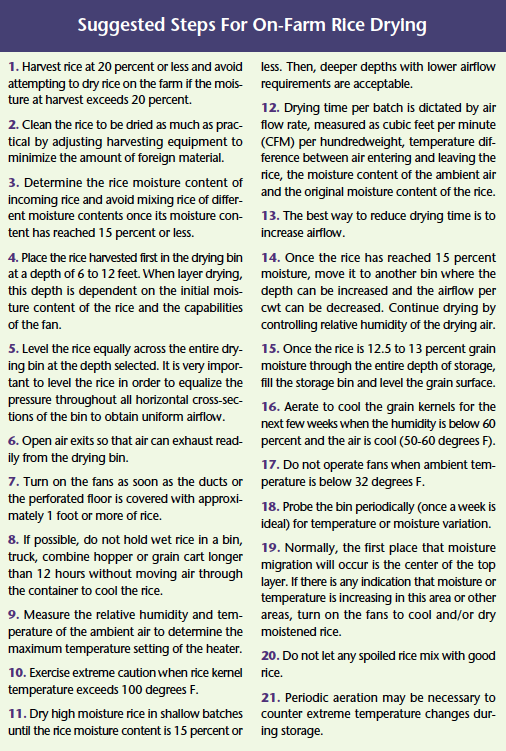