Randy Chrisman had an “aha” moment during the 2016-17 winter when he came up with the idea for a rubber-tracked sprayer with a wide boom that would be more efficient than traditional steel-wheeled rigs.

A Williams, California, rice producer who also runs a custom-application business, Chrisman had Iron Tree Solutions fabricate his dream machine in time for a trial run during the 2017 season. After a few modifications, the rig was launched commercially in 2018.

“We were struggling with all of the steel wheels getting stuck and couldn’t cover the ground we needed to,” Chrisman says of his inspiration.

The new sprayer — built on two sets of 9-inch rubber tracks with a 105-foot-wide boom — proved so successful he ordered two more built for the 2019 season but with 120-foot booms.

The track vehicles are part of a fleet that Chrisman and David Dunlap, also a Williams-area rice farmer, have built since they started their custom-application business 10 years ago with two steel-wheeled sprayers.

Business has “snowballed,” and the two now have a stable of six steel-wheeled sprayers along with the one rubber-track rig. Along the way, they also designed and built six large nurse trucks to service the sprayers.

“A lot of people just don’t want to deal with the chemicals and the rules and regulations,” he says. “And it takes a certain economy of scale to be efficient.”

Steel-wheeled sprayers tend to cut through the hardpan of a rice field, causing the spray booms to swing wildly as they do. In the process, the wheels also bring up the heavy hardpan soil, creating ruts and ridges that can cause harvest challenges for draper-headers running close to the ground to pick up lodged rice.

The ideal behind the rubber tracks is to spread the weight out more evenly and reduce the pounds-per-square-inch pressure so the machine doesn’t breakthrough the hardpan. This also significantly reduces the boom swing, allowing for a much wider boom.

And many of the ruts from the tracks in the top few inches of soil tend to melt during the season, providing a more even surface at harvest, he says.

But the track sprayers are limited to a 500-gallons tank to keep down the weight and avoid breaking through the hardpan.

The track sprayer itself is guided by GPS as is each 10-foot segment of the boom. This helps minimize overlaps and skips as well as ensuring the crop protection product is applied only to the rice, he says.

The guidance system also helps in triangular or other oddly shaped fields, where the spray operator doesn’t have to worry about manually shutting off portions of the boom to treat corners. Based on a geo-referenced field map, the GPS-guided spray controller automatically shuts on and off the appropriate boom segments.

Kurt Richter, who farms with his family near Colusa, hired Chrisman last season to spray about 1,000 acres of rice using the track rig. The fields were mostly on alkali or recently cut ground where other sprayers would have gotten stuck.

“Amazing,” is how Richter described the results.

“It’s built like a tank,” he says. “The other boom (on a steel-wheeled tractor) kind of flops as it’s hitting ruts. And to watch this thing spray, the boom doesn’t flop at all. You don’t have those waves of herbicide. You have one straight line out there going straight down. It gives better coverage and more consistent application of the herbicide, plus it’s fast.”

Richter was so impressed with the outcome that he’s already contacted Chrisman about doubling the acreage sprayed this season.

“It wasn’t so much by design as luck that this was going to be used for the trials. That having been said, it’s a very impressive piece of equipment,” Cook says.

What caught his attention was how well balanced the machine was, how it didn’t make deep cuts in the field like steel-wheeled rigs and how it made quick work of the applications.

If there is a downside, it’s that the 9-inch-wide tracks damage rice plants underfoot, creating what Chrisman describe as an “ugly” field right after application.

“The day of application is the worse,” he says. “If you come back a week later, it looks 10 times better.”

Much of the difference is due to the track rig’s wider boom, which allows it to treat about 60 percent more ground in each pass than a steel-wheeled machine. With the new sprayers’ wider booms, he says the crop loss should be even less.

Despite the track rigs’ improved efficiency, Chrisman says they will still run steel-wheeled sprayers for smaller fields or in tight situations, such as around power poles, because of their nimbleness.

“There’s still a place for these steel-wheel tractors,” he says. 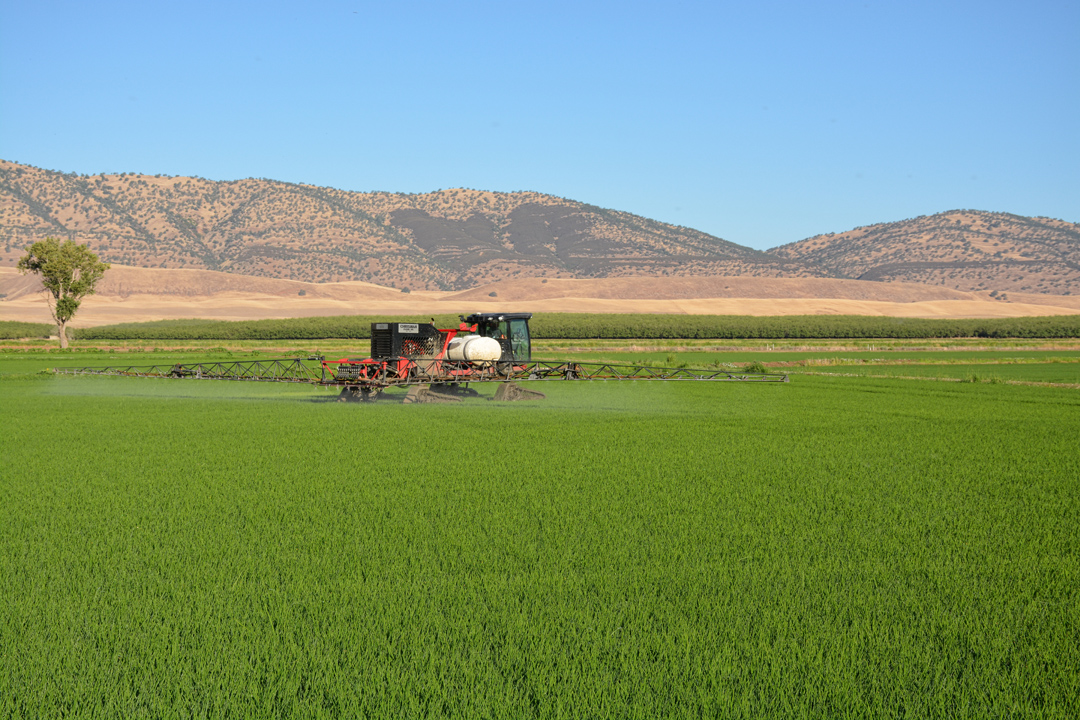