Colombian trip helps Texas A&M entomologist learn more about a rice planthopper and prepare in case it reappears in the South. 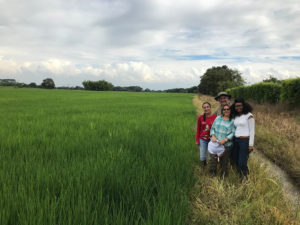 Drs. Fernando Correa (with hat) and Maribel Cruz (with sunglasses) with colleagues at a commercial rice field near CIAT in Cali, Colombia. Note all the patches of yellow discoloration in the field caused by hoja blanca. Translated as “white sheet,” the disease is caused by a virus transmitted by the rice delphacid — photo by Mo Way

The rice delphacid (Tagosodes orizicolus) is a serious rice pest in much of Latin America and the Caribbean. In 2015, the Texas ratoon crop was severely damaged by this plant-sucking insect, which is related to leafhoppers.

I don’t know how it got to Texas, but I suspect it was carried here by storm(s) passing over Mexico or Central America. We have not observed it in Texas since 2015. In case it invades again, we have conducted some proactive research to learn more about its biology, management and damage potential.

Recently I was invited to the International Center for Tropical Agriculture (CIAT) in Cali, Colombia, to observe first-hand this insect and the virus it can carry that causes a severe rice disease called “hoja blanca.” Translated, that means white sheet.

My trip and prior work on the rice delphacid were paid for by an Insect Vector Disease Grant from Texas A&M AgriLife Research.

My gracious hosts at CIAT were Drs. Fernando Correa and Maribel Cruz, who have years of experience working with the insect and disease. Correa is a rice pathologist and leader of the rice program at CIAT. Cruz is a rice entomologist/breeder who works cooperatively with CIAT but is employed by the Latin American Fund for Irrigated Rice, or FLAR.

Briefly, this is what I learned during my four days at CIAT: 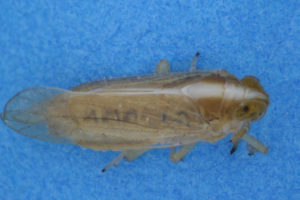 A close up of a rice delphacid, known scientifically as Tagosodes orizicolus — photo courtesy CIAT

• 1. The insect can cause hopperburn to rice plants – the result of direct feeding. This is what I observed in Texas.

• 4. The earlier the infestation, the more damage occurs, which can lead to drastic yield reductions including panicle blanking.

• 6. The virus is detrimental to the plant and the insect. Over time, the virus builds up in the insect population to a level high enough to reduce population density, which eventually ends the epidemic (epidemics are cyclical).

• 7. In Colombia, rice is planted and grown throughout the year, so there is continuous availability of host plants for the insect and virus. So it seems reasonable to assume that if it invades Texas again, ratoon cropping may exacerbate the problem.

• 8. Barnyardgrass is a good alternate host for the insect as well as some other grassy weeds.

• 9. Widespread and frequent use of insecticides can kill off natural enemies of the insect.

• 10. Insecticidal seed treatments with activity against the insect, such as imidacloprid, may delay infestations and reduce damage severity.

• 11. Use of pyrethroid insecticides may actually “flare” populations of the planthopper.

• 12. CIAT relies heavily on breeding for tolerance to the insect and disease. Tolerant varieties, such as Fedearroz 2000, also have good milling/yield potential and are widely planted. Tolerance to the virus seems to be controlled by one or two genes.

• 13. Bluebonnet 50 is very susceptible and is used as a check in variety screening.

Staying one step ahead 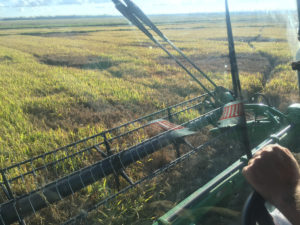 Breeding for tolerance to the insect and disease has been ongoing at CIAT since 1974 when the disease and vector relationship was initially identified.

The virus and insect have and can evolve to overcome tolerance; thus, this program has been absolutely essential to the rice farmers of Latin America where the insect and virus occur.

I saw first-hand the tremendous amount of work and effort put forth by Correa, Cruz and their colleagues to develop tolerant varieties and effective integrated pest management programs to keep ahead of the insect and disease.

I will continue to work with CIAT/FLAR to be ready for the future. This is an excellent example of how cooperation with scientific colleagues in other countries can benefit the U.S. rice industry.

Dr. M.O. Way is a professor of entomology at the Texas A&M AgriLife Research Center in Beaumont, Texas. Dr. Fernando Correa is a phytopathologist and rice program leader at the International Center for Tropical Agriculture, or CIAT, in Cali, Colombia. Dr. Maribel Cruz is a rice breeder and entomologist with the Latin American Fund for Irrigated Rice, or FLAR, in Cali. FLAR and CIAT work closely together.