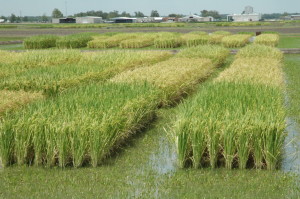 Heavy rains have prompted some Texas AgriLife researchers to consider postponing their trials for a year. The trials pictured are from 2015 — photo courtesy Texas AgriLife

When it rains, it pours.

Rice producers in Texas who have suffered from reduced water deliveries and four years of drought now are experiencing too much rain.

As a result, officials with Texas A&M AgriLife Research and Extension predict yields may be off by 10 to 15 percent. Overall, they expect higher rice production because of an estimated 28 percent increase in planted acres.

“Those who managed to get into fields to plant before the rains began to delay things – as long as their fields weren’t flooded – they are doing OK, Ted Wilson, director of the AgriLife Research and Extension Center in Beaumont, said in a news release. “But we’ve had some areas that have received a tremendous amount of rain, so I don’t doubt that the yields are probably going to be down.”

Wilson bases his estimates on a weekly crop survey that AgriLife and the rice industry in the state’s 21 rice-producing counties produce.

The optimum planting date for the Texas rice crop is mid-March through mid-April. If planted on time, producers cut the first crop in August and September.

Those who choose to ratoon the rice allow it to regrow and cut a second crop in November or December.

The later the first crop is planted, the less time it has to grow the second crop.

That’s typically where growers see overall yield reduction. The ratoon crop acreage is typically 50 to 85 percent of the first crop, depending on the county.

Two other factors also are affecting Texas rice growers. The Lower Colorado River Authority, which for the past four years has not delivered any surface water to rice, is releasing water this season. That prompted increased acreage.

The second factor — an oversupply in Thailand — depressed prices and caused farmers to put a pencil to what price would allow them to make a reasonable return. Weather-related reductions in yield could cause a significant dent in those returns.

The Beaumont Center hasn’t escaped the effects of the rains, either. Planting of numerous research plots also has been delayed, meaning some studies could be postponed for a year.