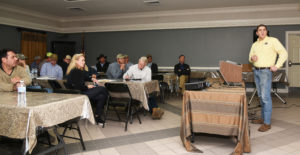 LSU AgCenter entomologist Blake Wilson talks about a new insecticide, Fortenza, that will be available for farmers this year — photo by Bruce Schultz/LSU AgCenter

In a series of meetings in southwest Louisiana, Louisiana State University AgCenter experts offered farmers advice for growing their 2019 crop.

Farmers met recently in Welsh, Abbeville, Ville Platte and Crowley only a few weeks from the start of planting season.

The grain size of PVL108 is shorter, but it has about a 20 percent better second-crop yield potential, he says.

“There’s certainly material coming that should be an improvement,” Famoso says.

A long-grain conventional line probably will be considered for release this year as a variety. It has an 8 to 10 percent yield improvement from Cheniere, he says.

The AgCenter will be seeking commercial partners for possible commercial release of LAH169, he says.

If a field requires longer than three to five days to flood, a product such as Anvol or Agrotain should be used on urea nitrogen fertilizer, he says.

Farmers grew 434,000 acres of rice in Louisiana last year, and that included a reduced amount of Clearfield rice, Harrell says.

Clearfield acreage is declining because the technology is becoming less effective, but Provisia offers an alternative for fields with bad infestations of red rice and weedy rice, he says.

Furrow-irrigated rice, or row rice, is becoming more popular in north Louisiana, and the AgCenter is conducting more research on the practice.

Loyant’s effectiveness may have been impaired when it was applied during hot weather, he says.

Webster warns that drift from aerial application of herbicides, insecticides and fungicides remains a concern. He advises that applications should not be made when winds are still because of possible temperature inversions. Under that scenario, materials could volatilize and move off target.

Herbicide manufacturers advise applying their products with a 2 to 5 mph wind, Webster says.

Arkansas farmers had so many problems with drift in 2018 that regulators imposed a system of restrictions. But most Louisiana farmers and aerial applicators have avoided the situation by following safeguards.

“If we don’t continue those, we’re going to get the same kind of regulations,” Webster says. 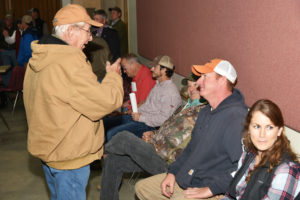 The new fungicide Amistar Top didn’t work as well as expected, possibly because it usually was applied on fields where the plant canopies were not as open. The product was more effective when it was used with propiconazole, which probably acted as a surfactant, he says.

For fields with blast problems, Stratego or another strobulurin-containing fungicide should be applied at heading he says.

“It’s a very sudden death event,” Shirley warns. “Your production goes to zero in a couple of days.”

He says the viral disease appears to affect only crustaceans.

Shirley advises farmers to avoid spreading the contamination by holding water in affected fields and cleaning boats and traps from those fields.

The AgCenter is seeking research funding to learn more about white spot, he says.

The AgCenter will study possible crawfish reductions in fields where a second rice crop is grown. Two 15-acre ponds at the South Farm of the AgCenter H. Rouse Caffey Rice Research Station will be used in the research.

Fortenza was tested at the Rice Research Station near Crowley for the past four years with good results against weevils.

Dermacor has 80 percent control against weevils and stem borers, and research has shown that one weevil can reduce yield by 1 percent, Wilson says.

He advises farmers to report any finding of apple snails. The invasive species is a threat to newly planted water-seeded rice, and it can cause major problems for crawfish producers.

Laws of supply and demand

An overabundance of rice on the world market is suppressing prices, says AgCenter economist Mike Deliberto. Last year’s average U.S. yield of 7,500 pounds per acre was a 15-pound increase from 2017.

The U.S. Department of Agriculture projects a mid-year price of $10.70 per hundredweight.

“This is going to open the door to pick up some market share,” he says.

The possibility of exporting U.S. rice to China is strong, with details of a trade agreement pending. Vietnam currently supplies much of China’s rice import demand, and it has increased its market share in South America, Deliberto says.

The soybean market is dominated by the United States. The trade war with China has resulted in a large amount of soybeans in U.S. storage. The Brazil spring crop is nearing harvest, he says.

The soybean oversupply is “massive,” Guidry says. “We’ve never been anywhere close to where we are.”

Rice and soybean farming will be a challenge in 2019, he says. “For both commodities, it will be a difficult year for profitability.”

AgCenter economist Lawson Connor says Argentina and Mexico have purchased increased amounts of U.S. soybeans. Additional tariffs will be imposed by the Trump administration if no agreement is reached with China by March 2.

China bought more U.S. soybeans last month but not as much as expected, Connor says.

It’s possible that U.S. soybean acreage could shift to corn and cotton, and a decrease in Brazil’s soybean production could result in higher soybean prices, Connor says.

Bruce Schultz, an assistant communications specialist at the LSU AgCenter in Crowley, contributed this article. He may be reached at BSchultz@agcenter.lsu.edu.