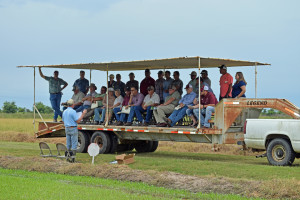 The first is a cross of Lacassine, a variety obtained from Louisiana State University in 2003, by Lagrue, a University of Arkansas variety.

This candidate has good yields that are about 10 percent higher than the recently released Presidio and about 5 percent more than Cocodrie, an LSU variety. In other words, it’s close to Antonio.

The second candidate is a sister line of Antonio, which is a cross of Cypress by Cocodrie. Antonio has about 20 percent or intermediate levels of amylose, a starch responsible for rice kernel stickiness or fluffiness.

The lower the amylose, the stickier the rice. Sushi rice, for example, has low amylose.

The sister line has about 25 percent amylose, so it should cook up much fluffier.

“My plan is to give it to the millers and hopefully one of these will be good for them,” he said. “If not, that will be the big question. If these two are bad according to the mills, we’re not releasing them.” 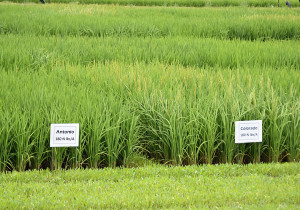 Tabien said he only has about three dozen lines of potential candidates at Eagle Lake, but he has about 200 lines at Beaumont.

He also is conducting trials examining how varieties react to being underwater for prolonged periods, such as what happened this season in Beaumont.

“Some had good germination in 4 inches of water for three weeks,” he said. But other varieties, such as Antonio, had significantly reduced germination.

Entomologist Dr. Mo Way warned growers about a pest first seen in the 1950s and 1960s but that disappeared until the 2015 season–the rice delphacid or rice planthopper. It is a native of Latin America.

The 1/6-inch long insect has piercing and sucking mouth parts and feeds on plant juices. It produces what’s known as “hopper burn.”

As it feeds, the plant hopper excretes a sticky product known as honeydew. Black sooty mold is attracted to the sooty mold.

Both the immature nymphs and adults are marked by two racing stripes down their abdomen. The pest showed up in the rice-production area west of Houston last year in the second, or ratoon, crop. In the worst fields, Way said he was able to catch 200 to 300 in just five sweeps of the sweep net. The insects also caused significant yield reductions in the most severely infested areas of the fields.

Since the 2015 season, Way has been monitoring for the insect and has to find even one during the winter or so far this season.

“I expect it to show up eventually,” Way said. “We had that mild winter and really, really high populations. I just can’t understand how it could just disappear. My gut feeling is we’re going to start seeing it on the second crop again.”

Way has already alerted the Texas Department of Agriculture in case the industry needs to obtain a Section 18 Emergency Use Permit for insecticidal treatments.

e pest—Orthene and Tenchu. He said the TDA likely won’t pursue a Section 18 for Orthene.

Pyrethroids, on the other hand, actually flare delphacid populations. “So we have to be real careful with the pyrethroids with the planthopper,” Way said.

He urged growers or consultants who suspect the rice delphacid to contact him at 409-658-2186 or moway@aesrg.tamu.edu.

Kernel smut, a fungal disease of rice, has been on the increase in Texas during the past five seasons. But last year was one of the worst both in conventional varieties and hybrids, said Xin-Gen “Shane” Zhou.

One of the challenges with kernel smut is it doesn’t produce any symptoms until harvest when it’s too late to treat.

“So how do you control it?” Zhou asked. “Timing of fungicide is most important and should be at the swollen boot stage. You shouldn’t apply fungicide at heading or after boot split. It produces no effects and is a waste of money.”

He outlined three factors that influence the incidence of kernel smut:

1. If the field has a history of kernel smut.

3. If you apply more than 160 pounds of nitrogen per acre.

Fortunately, Zhou said, propiconazole is effective if applied at the proper timing.