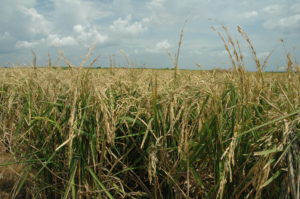 Texas rice farmers are seeing near-record yields of good quality grain, and many are considering a second harvest, according to Texas A&M AgriLife Research experts.

Dr. Lee Tarpley, AgriLife Research crop physiologist, Beaumont, says despite a few problems for some growers, a near-record yield is expected for producers who planted their fields early in spring.

Producers in the state’s rice-growing coastal region who were able to take advantage of planting windows before late March avoided heavy spring rains that caused delays for other growers. Delays into April exposed late-planted rice to hot spells that may have hurt yields.

“Folks that planted late got hit by hot periods in July,” Tarpley says. “Daytime temperatures were in the upper-90s to over 100 degrees with nights above 77 degrees, which decrease yield when they coincide with flowering.”

The U.S. Department of Agriculture reported Texas green yields were 9,000-11,000 pounds per acre with good quality. There were also reports of market uncertainty and falling prices related to ongoing trade disputes with China and negotiations with Mexico and Canada regarding the North American Free Trade Agreement.

Dr. M.O. Way, AgriLife Research entomologist, Beaumont, says about 190,000 acres of rice were planted this season, and half the acreage was planted in hybrid varieties. Way says good growing conditions have many farmers considering growing a ratoon crop, that is to allow another crop to grow from the stubble left after harvest.

Ratoon cropping could produce an additional 35-50 percent of the main harvest, he says, with fewer input costs beyond fertilization and water. About 60 percent of Texas rice acres are ratoon cropped typically.

Way says there was plenty of water for rice fields in 2018, but there were a few problems, including rice water weevil, stink bugs and injury to some fields from a new herbicide. Damages from birds and wild pigs were a problem, and producers noted increased wild pig activity.

Producers controlled pests for the most part, and other crop damage was limited, Way says. But heat damage to later-maturing fields was reported as high nighttime temperatures caused some panicle blanking.

Way also says increased rice acreage and good yields have caused problems with storage of rice post-harvest because there are not enough facilities to accommodate the crop.

“I don’t have a good feel for what percentage of producers will ratoon this year,” he says. “But if it stays warm they could see another harvest with less input costs, and that could mean a better bottom line.”