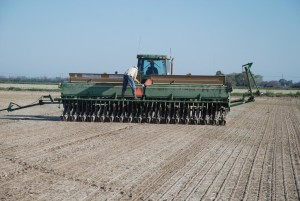 The amount of planted rice this year is expected to be up 17 percent from 2015, according to the USDA’s Planting Intention report. — Photo courtesy LSU AgCenter

The supply and demand outlook for the rice market remained mostly unchanged with the release of U.S. Department of Agriculture’s World Agriculture Supply and Demand Estimates report on March 9. The only change made was a 2 million hundredweight reduction in total rice exports for the 2015/16 marketing year.

This reduction continues to highlight a significant issue for this market in finding consistent demand. Export demand continues to be highly variable for both rough and milled sales. Although long-grain rough sales are up roughly 15 percent from the previous year, long-grain milled sales are more than 10 percent below last year.

For long-grain rough rice, good sales to Panama, Columbia, Honduras and Venezuela helped to boost total exports early in the marketing year but have not been followed up with significant additional purchases. Likewise, for long-grain milled rice, sales to Iran and Iraq during the first three months of the marketing year have not been followed by additional purchases.

This erratic nature of export demand has been one of the reasons the rice market has been unable to provide sustained support and strength to prices.

While there continues to be hope for future expanded trade with Cuba and China, the current facts are that U.S. rice exports face an uphill challenge in being able to provide a positive spark to this market. A stronger U.S. dollar and higher U.S. rice export prices relative to competing suppliers provide little optimism for significantly improved export demand moving forward.

With no significant short-term improvement expected in the demand side of the equation, the market will continue
to focus on potential production and supplies in 2016. The USDA’s Planting Intentions report on March 31 will be an important factor in determining what type of future price movement to expect.

Pre-report expectations are for rice acres in the United States to increase in 2016. Of all of the major rice-producing states, only Louisiana expects acreage to remain mostly unchanged in 2016.

Expectations for Texas and California are for increased acres with significant improvements in drought conditions and water availability. Acres in Mississippi and Missouri are expected to increase as low prices for competing commodities have producers looking to include rice in their crop mix.

The big question is what will happen in Arkansas. Although most analysts feel that acreage will increase, the bigger question is by how much. Wet conditions limiting planting of corn and other crops have many believing that many of those acres could be switched to rice.

Reports of large supplies of old-crop rice remaining in Arkansas, the potential for increased acreage and supplies in 2016, and continued variability in export demand have all created the downward trend in both futures and cash prices since the beginning of 2016.

Current old-crop prices have been reported in the low $11 cwt ($18 per barrel) range, whereas new-crop bid prices
have been in the high $10 cwt (low $17 per barrel) range. Without a boost in export demand, prices look to remain in this sideways to downward pattern in the short term.

In the long term, it is difficult to project any significant price improvement. Without major improvements in demand, larger supplies in 2016 unfortunately suggest prices for the 2016 crop in a range from the $9 to $11 cwt (mid $14 to low $18 per barrel) level.