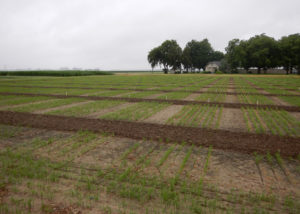 This rice variety trial at the Delta Research and Extension Center in Stoneville, Mississippi, is the second planting in this field. The first was terminated due to inadequate stand — photo by MSU Extension Service/Bobby Golden

The third week of March is usually the beginning of rice planting season in Mississippi, but fields were not dry enough to hold tractors until May in most locations.

Many growers were still scrambling to get rice in the ground by early June due to unusually high rain amounts in the first quarter of 2019. While more than 90 percent of the crop had been planted as of June 3, only 74 percent had emerged, according to the U.S. Department of Agriculture. This is well behind the five-year average of 92 percent emerged by this date.

“Rice production has been affected more in north Mississippi by weather events than the Bolivar County/Highway 82 corridor,” says Bobby Golden, rice specialist with the Mississippi State University Extension service. “Tunica County growers planted the bulk of their rice in the latter half of the planting window and were still planting in early June. Unseasonably hot and dry weather in May allowed for some lost planting time to be made up.”

Just after growers got those last acres in the ground, consecutive rainy days returned to most of the state, dumping several inches of water in some locations.

“The rain we received at the end of the first week of June was a welcome blessing to some trying to flush recently planted rice up and incorporate herbicides,” Golden says. “But it created an issue for those needing to apply preflood fertilizer to dry ground on the acres getting ready to go to flood.”

Initial projections from the U.S. Department of Agriculture in March were for growers to plant 150,000 acres of rice this year, which would be about a 10,000-acre increase from 2018. But delays have decreased the amount of time growers had to plant. Acreage may wind up lagging behind last year’s total.

What growers were able to plant is in decent shape so far. As of June 10, The USDA estimated that 57% of the crop was in good condition, with 6% in excellent condition. Thirty-four percent was in fair condition.

Prices are also down from 2018. September rice futures are trading for $11.80 per hundredweight, down about 40 cents from a year ago.

“While total U.S. acreage will likely be lower, large beginning stocks are contributing to an expected increase in total rice supplies,” Extension agricultural economist Josh Maples says. “This was one reason that USDA is forecasting a lower price in 2019 than in 2018.”