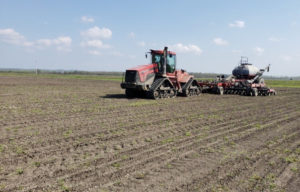 Sporadic sunny skies after three months of steady rain have made planting a mixed bag in Missouri rice country.

On Blake Gerard’s operation in nearby Cairo, Illinois, they planted their first rice acre of the year earlier this week.

“We were blessed with some dry weather, three days of sunshine, and it was 80 degrees yesterday,” he said. “Most of our fields are prepped and we were able to drill seed two days this week. We aren’t water seeding yet because the temperature is supposed to drop down to 56 degrees today and that’s cooler than I would like. We’re planning to water seed during the next warm up period though.”

On his operation, Gerard typically water seeds 40% of his rice acres and drills the rest.

Farther south in Missouri, the team at the Martin operation in Bernie has been busy planting this week as well.

“We started planting corn on Monday (April 6) and should get all of it planted with a couple more days of good weather. Once the corn is planted, we’ll start planting rice,” said David Martin. “If the weather and everything else cooperates, it looks like Missouri is going to have a big crop this year. Last year we planted almost 200,000 acres, and I think we will plant over 200,000 this year. I expect us to have the same growth percentage-wise as Arkansas.”

In Dunklin County, Rance Daniels and Zach Worrell say their fields are still too wet to plant.

“A few people in our area have started planting where it has dried out, but for the most part it’s still too wet down here,” Daniels said. “We got a few days of nice weather but not enough to dry the fields out so we can get in and plant.”

“It’s still wet on our farm and about to rain some more,” said Worrell. “Until it dries up, we’re getting things ready as much as we can at the shop.”

Missouri Gov. Mike Parson issued a COVID-19 stay-at-home order for the state on April 6, but it has not affected producers much, according to Daniels.

“It’s business as usual, but people are being more cautious,” he said. “There are a few stores that aren’t allowing customers to walk in and instead you have to call ahead with your order, and they set it outside for you to pick up. Most stores are limiting the number of people allowed inside. They ask that you wait in your car until someone leaves if there are a lot of people inside already.”

“It’s business as usual in our area as well,” Gerard said. “Airports, seed dealers and fertilizer companies are still in business, so we are, too.”

This article appeared originally in USA Rice’s “The Rice Daily.”