Thinking outside the box

The origin of the phrase “thinking outside the box” is typically attributed to the Nine Dots Puzzle, pictured below. Three rows of three dots are inside a box. The challenge is to connect the dots with four straight lines without picking up your pencil. 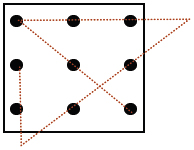 As it turns out, the solution to the puzzle involves going outside the perimeter of the box that surrounds the dots. Hence, to solve a problem or think creatively, you often have to look at things with a new or different perspective.

First, it’s necessary to identify what the box, or challenge, is. Then take a look at what’s already inside the box in terms of tried and true practices or conventional wisdom that has worked in the past. Thinking outside the box does not necessarily mean tossing aside everything that is inside. Instead, consider using an approach that involves bringing in some new ideas to complement the things with which you already have to work.

Take a look at the puzzle. Notice that in order to connect the dots, or address the challenge, you don’t go completely outside of the box to do it.

Just cross the perimeter a couple of times, and the puzzle is solved. In our cover article on pages 6 and 8, California rice farmer, Fritz Durst, notes that his father’s philosophy was to learn by doing. “He wanted me to figure things out for myself,” Durst says. “I think this paid off for me because I’ve been thinking out of the box for quite some time now.”

During the late 1990s, the northern Sacramento Valley was having a problem with blast in rice, so there was a need to find new areas to grow rice for seed. Durst was already growing other crops for seed, so he was familiar with the concept that was, so to speak, “inside the box.” He had a rice rotation set up and knew how to grow other crops for seed, so he decided to step across the perimeter and give growing rice seed a try.

Also, when it comes to dealing with herbicide-resistant weed biotypes, Durst says his associate, Garth Williams, helps him with the thought process. This doesn’t mean they have to ditch the herbicides all together, but “think outside the box” and look at field history to figure out how to rotate them to achieve their weed control goals.

Challenges arise in all aspects of our lives, and when you run into one that involves your farming operation, study the tried and true options, then try looking beyond them.

It all starts with a seed — the right seed

Learning as I go: My first exposure to rice in 2022