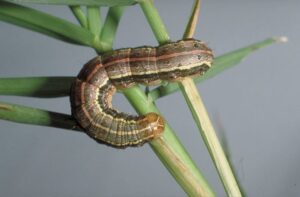 In large numbers, the fall armyworm can be devastating to crops, such as bermudagrass (pictured) and rice — photos courtesy Texas A&m AgriLife

Dr. Greg Sword, Texas A&M College of Agriculture and Life Sciences Department of Entomology professor, has received $499,000 to determine fall armyworm behaviors and genomic traits that could aid in controlling the agricultural pests.

The three-year project funded by the National Institute of Food and Agriculture will be a cooperative effort with the U.S. Department of Agriculture scientists around the country.

The project is titled “An integrative approach to determining fall armyworm population genomics and dispersal.”

The research sprung from studies by Texas A&M University graduate student Ashley Tessnow, who will work on the new project as a postdoctoral researcher. Her doctoral research tracked the genetics of fall armyworm populations as they moved south to north through Texas into a location in Minnesota.

Learning more about the behavior and ecology of these fall armyworm strains and their hybrids will be the focus of the new project.

The timing of the research is fortuitous, Sword said. The fall armyworm has recently become a global invasive agricultural pest, spreading rapidly across Africa, Asia and, most recently, Australia, devastating crops along the way.

In the United States, the fall armyworm has long afflicted commercial crops such as forage grasses, corn, wheat and ryegrass; it can also be found in gardens and on turfgrass. But despite the armyworms’ history of damage and the global attention, Sword said little is known about the insects’ genetics, population biology and migration throughout the United States.

He said the research could identify improved control methods and specific strategies directed at the individual strains or hybrids.

“We want to know what keeps these two strains distinct, what keeps them separated — whether it’s their preferred diet, reproductive behavior, whether they’re more active at certain times of the night — as well as the genetic makeup and behavioral characteristics of hybrid populations,” Sword said. “We believe this will give us a much better understanding about how to control these different populations throughout their migration.”

Tessnow, Sword and other researchers will use improved DNA technology to identify key characteristics within the two strains of fall armyworms in the U.S. and hybridized populations. The project will also use population genomics, behavior and stable isotope assays to characterize the relationship between fall armyworm population structures, their mating behavior and their dispersal pattern across the country.

“Enhancing our understanding of these populations may allow us to improve management strategies and minimize our use of chemical insecticides,” Tessnow said.

The project will expand the sampling and genomic identification of fall armyworms as they migrate across the United States from California to the Carolinas.

The pest overwinters in South Texas and South Florida, and it migrates north through the central and eastern United States and into Canada annually. Notably, this will be the first study that explores the migratory pattern of fall armyworm populations in the western United States, which have so far been ignored. 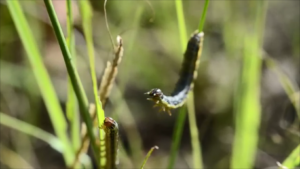 Fall armyworms feed on Bermuda grass pasture. Infestations of the pest can cause considerable damage to crops in a matter of hours.

Fall armyworms migrate as moths, but it’s the larvae or caterpillars that are destructive to a wide range of crops.

The larvae got the name because they appear to march across croplands consuming the greenery in their path. They are picky eaters that prefer high-quality, fertilized crops and forages typically found on fields maintained for agriculture production.

These destructive caterpillars are green, brown or black in color and can be identified by the white inverted Y on their head. They can grow up to 1 inch in length. Mature armyworms can consume 85% of their diet in the final two to three days of their larvae stage.

Fall armyworm moths are highly mobile, Tessnow said. They can move almost 1,000 miles in a generation. Additionally, they can lay up to 2,000 eggs that hatch in two to three days. There are four to five generations of fall armyworms per year as they make their seasonal migration.

Tessnow has studied the fall armyworm since 2015. She noticed a lack of understanding in published literature about the distinct strains, their population behaviors, migration patterns and basic ecology.

“It’s a classic story that this pest has been around for so long, but there’s not a lot about it that we know,” Sword said. “That’s why Ashley started work to fill the knowledge gaps. This project expands her work more broadly across the U.S., and we expect it will help growers here and around the world deal with a significant agricultural pest.”

Outbreak control is the goal

The new project kicked off in January with Tessnow gathering 20 gallons of water from regions with different isotopic signatures related to their latitudinal location across the United States. These isotopes of water are incorporated into the moth’s exoskeleton and can help determine where the caterpillars are originally from.

“The molecular makeup of water varies across latitude, and there are fewer heavy isotopes as you move north,” she said. “So, by taking samples, and growing plants with that water here in College Station, we can determine how these insects incorporate the heavier isotopes into their chitin. We can then compare the isotopic profiles with the wild-caught moths sampled in locations along the migration route to determine which direction the moths are flying, north to south or south to north.”

Sword said this research will also likely answer another knowledge gap – do generations of fall armyworms migrate south to north only or do they circle back as part of a continuous cycle driven by weather conditions? The isotope profiles associated with latitudinal movement will help the team answer that and other questions related to the pests’ movement, breeding and feeding behaviors.

Tessnow said the potential application of what the research reveals about the fall armyworm will likely have a broad impact to mitigate major outbreaks.

“We’d love to see strain-specific control measures develop based on the specific physiology because there is evidence that these strains respond differently to pesticides and may be better managed if treated as different pests,” she said.

For instance, Sword said, improved control methods for the C-strain that is evolving resistance to Bt corn varieties, which produce proteins toxic to lepidopteran pests, would be an important discovery.

Sword and Tessnow said they are excited about the prospect for the study and the broad application of what they learn about controlling the now global agricultural threat.

“There is a lot of interest in what we are doing because of the fall armyworm’s impact on agriculture productivity,” Sword said. “It’s been exciting for both of us to be part of research that could make a big difference for our producers here in Texas and across the U.S., but it takes on a different level as a scientist when you’re talking about helping producers around the world.”

Adam Russell is a communication specialist for Texas A&M AgriLife. He may be reached at adam.russell@ag.tamu.edu.