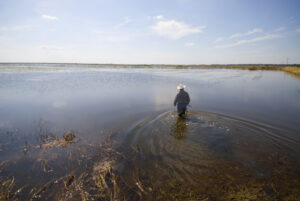 Widespread flooding from Hurricane Laura could affect crawfish production for the upcoming season, but the extent of any damage will depend on whether crawfish producers are able to get the unwanted water off their fields in a timely manner.

When storm-related flood waters cover pond levees in July, August or September, crawfish have no choice but to get out of their burrows, said LSU AgCenter and Louisiana Sea Grant aquaculture specialist Greg Lutz. Unfortunately, once they come out, they usually die because of hot, stagnant water and predation by birds and other predators.

The crawfish life cycle in Louisiana is the result of millions of years of adaptation to local conditions.

Mature crawfish spend the summer sealed in burrows along pond levees while crawfish farmers plant rice or other vegetation to serve as the basis for a natural food chain when the ponds are flooded again in the fall, Lutz said.

Female crawfish lay their eggs while sealed in these burrows. Egg laying begins in late August, peaks in late September or early October and continues all the way until November or even early December.

“Crawfish eggs are attached to the bottom of the female’s tail, and that’s where they hatch,” Lutz said. Hatchlings cling to their mother’s tail for several weeks after hatching.

Normally, after a female crawfish has eggs or babies on her tail, she waits to come up out of the burrow until a heavy rain. This gives her hatchlings a good chance of finding open water where they can disperse and begin growing.

“She’ll wait as long as it takes, and her hatchlings can usually live off of their yolk reserves for a month or two,” Lutz said.

Length of flooding plays a role

When crawfish ponds are flooded during the summer before egg-laying has begun, crawfish that manage to survive being flushed out of their burrows attempt to go back underground, either using an existing burrow or constructing a new one.

Several years ago, research at the LSU AgCenter ­­­­­­­­­­­­­­­­­­­­­­H. Rouse Caffey Rice Research Station in Crowley confirmed that female crawfish can survive being flushed from the ground several times and still go on to spawn in the fall if they can get back into a burrow, Lutz said.

But if flooding continues for a week or longer with hot temperatures, oxygen levels in the water drop to zero, and crawfish are forced out onto the pond banks, where they become easy prey.

A producer can suffer heavy losses of the mature crawfish that he or she was counting on to produce the next season’s babies, he said.

“What should crawfish farmers do if these storms cause widespread flooding?” Lutz asked.

Ponds should be drained as soon as possible, he said. This will help eliminate predatory fish that often enter with floodwaters.

“One sunfish can eat the equivalent of a sack of crawfish over the course of the season, so fish control is an important consideration,” Lutz said.

Once fish have been eliminated, growers should put a couple of inches of water back on the field if they have planted rice as a forage. In fields where rice has already been harvested, producers are encouraged to manage the rice re-growth but wait until early October to flood, he said.

For ponds where rice could not be planted as a forage crop or ponds with natural vegetation, producers should still drain them as soon as possible to get rid of fish. “As always, waiting to flood until temperatures have cooled off in mid-October makes the most sense economically,” Lutz said.

“Louisiana’s crawfish aquaculture industry has dealt with hurricane impacts many times over the past five decades, and each year producers are more experienced and better prepared to deal with them,” he added. “Hopefully Laura will not cause prolonged flooding, and producers will see good reproduction this fall.”

Dr. Richard Bogren is a pressor of communications at the LSU AgCenter. He may be reached at RBogren@agcenter.lsu.edu