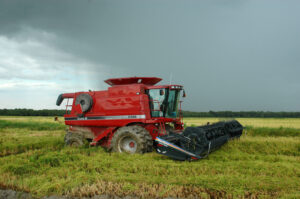 A combine cuts a rice crop as a storm approaches. South Louisiana farmers are hoping Hurricane Laura will have minimal effects on their crops and livestock — LSU AgCenter file photo by Bruce Schultz

Farmers are preparing for Hurricane Laura by getting their crops out of the fields and moving livestock away from coastal areas.

A previous storm that hit the Cameron Parish coast almost 15 years ago is being used as a reference with expectations Laura will bring a devastating storm surge.

Granger said rice farmers are working into the night to get their crop harvested, noting the storm could ruin half of the parish’s second rice crop.

Cattle are being moved as far as north Louisiana, and it’s expected the storm will cause considerable damage with saltwater flooding. “Their fences will be gone,” Granger said.

Cattle owners learned about moving their herds early after hurricanes Rita in 2005 and Ike in 2008. “We prayed we’d never have to do this again, but here we are,” Pousson said.

Jimmy Meaux, AgCenter agent in Calcasieu Parish, said Monday that cattle producers started moving herds this past weekend. “They got a lot moved yesterday but a lot more today. It just takes them a while to get them out of the marsh,” he said.

Farmers are receiving hay donations. “There’s plenty of hay out there this year,” Deshotel said.

The start of sugarcane harvest is just a few weeks away, and farmers are in the middle of planting cane for next year’s crop. Blair Hebert, AgCenter agent for sugarcane in the Bayou Teche region, said farmers have been able to finish about a third of the planting.

But the cane awaiting harvest will be affected by wind. If the plants are blown over, or lodged, the stalks will tend to grow upright if the cane isn’t knocked flat, but broken cane stalks will not recover.

“Sugarcane is a very resilient crop, and we’re certainly going to test it,” Hebert said.

This year was shaping up to produce a good sugarcane crop, possibly one of the best. “It sure had that potential to be up there,” he said.

A big problem for farmers after Rita was the amount of debris pushed into the fields by the tidal surge, complicating harvest.

Farmer Jeffrey Sylvester of Whiteville said he is caught up with rice harvest, but he has about 1,600 acres yet to mature. He was scrambling Monday to make drainage improvements on his soybean fields. “I have 700 acres of beautiful beans,” he said.

Farmer Richard Fontenot of Vidrine said he has gotten help and has been loaned equipment to finish the last of his rice crop. “We’ve been hitting it hard the last four days,” he said.

Fontenot said he attended a Farm Bureau meeting via Zoom on his phone while operating his combine. He expected to finish harvest Monday night.

AgCenter rice specialist Dustin Harrell said rice grain that’s still in the field could be knocked off the plants, and stalks could be blown down. Mature rice will sprout and become worthless if it is flooded. “Basically, you could lose the whole crop,” he said.

The soybean crop looks good this year. “Overall, the growing season for rice and soybeans has been very good,” Harrell said.

“It would be a big disaster for a storm to come in this late and ruin this crop,” Harrell added. “You can do everything right all year long and have this taken away in an instant.”