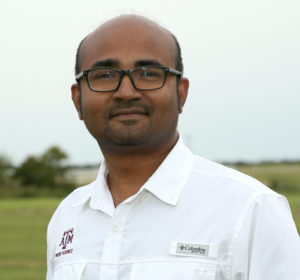 The awards, established in 1980, recognize the commitment and contributions of faculty and staff across Texas A&M AgriLife, and represent the highest level of achievement for the organization.

Bagavathiannan — called Dr. Muthu or Muthu by students and colleagues — joined the Texas A&M department of soil and crop sciences as a tenure-track weed science faculty in 2014 with a Texas A&M AgriLife Research appointment. He has since established a rigorous research group that is gaining national and international recognition in weed science research, his nomination stated. Rice is among the crops he works in.

“Muthu engages with producer groups, agribusiness industry and other funding sources to provide additional support to his program,” Baltensperger says. “He has quickly built an aggressive research program by attracting talent from national and international arenas.”

Bagavathiannan is also an active member of the TAMU-Unmanned Aerial Systems, or UAS, project where his program has made excellent progress in using UAS for weed management applications. He has provided significant leadership to the weed research and development activities within Texas.

He has authored or co-authored 26 peer-reviewed journal manuscripts, eight book chapters and four Extension bulletins since 2014. Two of his lead publications have been selected as featured articles by the journals “Weed Science” and “Weed Technology.”

“Muthu has also been very effective in translating his research findings into classroom teaching,” Baltensperger says. “His recent student evaluations were higher than the departmental average at both undergraduate and graduate levels.”

He developed a new course to train students with practical job skills in applied weed science and agronomy and prepare them for the Southern Weed Judging Contest. A total of 26 graduate students and 10 undergraduate students were trained as part of this activity.