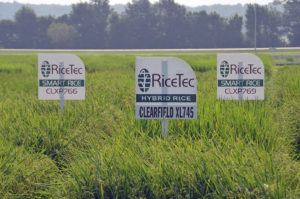 The same hot nighttime temperatures and untimely rains that significantly reduced rice yields in many parts of the Mid-South in 2016 also affected RiceTec’s seed crop.

As a result, the Houston, Texas-based hybrid rice company harvested much less seed than market demand and decided to give its longest and most loyal customers first rights of refusal.

“The weather’s the main factor that hit us,” says Van McNeely, RiceTec director of sales and technical services. “We’ve been bringing on new hybrids, and when you scale them up, there’s also a learning curve as far as production. But by far the biggest reason was weather related.”

Timing also is critical because female lines have to be at a receptive stage when male pollen is present.

In RiceTec’s case, most of its parent lines were developed for Texas Gulf
Coast production.

“The rains started at near-record levels in Texas,” McNeely says. “In April
and May, there was still a question about whether we could get the entire crop in.”

The short 2017 supply comes on the heels of a tight 2016 supply. Because of
the time it takes to produce seed, RiceTec has to forecast demand a few years out.

The company had anticipated a stronger demand for hybrids, but it didn’t figure that planted acreage in the Mid-South would increase as much as it did in 2016.

“We underestimated the market in 2016—acreage was up pushing 30 percent,” McNeely says. “We were sold out last year so we had zero safety stocks, then you throw the weather into it. And demand is huge.”

The company had looked into producing seed in South America during the 2016-17 winter to address the shortfall. But the U.S. Department of Agriculture did not grant phytosanitary approvals in time.

The company also is looking at new parent lines that can produce seed crops farther north in south Arkansas and northern Mississippi. But it will still be a few years before they’re available for large-scale seed production.