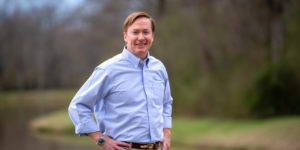 DU’s current CEO, Dale Hall, will remain in place to help with the transition until his retirement on June 30.

As ag commissioner, Putnam served in one of four statewide elected positions. He led the nation’s largest state Department of Agriculture and Consumer Services and was responsible for managing 1.3 million acres of state forests, running the state Energy Office and directing the state’s school nutrition programs.

In a news release, DU President Rogers Hoyt of Uvalde, Texas, says the group sought a leader with a unique balance of conservation, policy and agricultural background.

“In Adam, we feel we have hit on all three. Not to mention he’s an approachable, passionate and visionary person, so Adam was the perfect fit,” Hoyt said in the release.

As ag commissioner, Putnam was a strong advocate for Florida’s water resources. During his tenure, he expanded Florida’s best management water practices program through which farmers voluntarily adopt measures to reduce water and nutrient use.

More than 7 million acres – about 53 percent — of agricultural land in Florida is now enrolled in the BMP program.

Prior to serving as commissioner, Putnam served five terms in the U.S. House of Representatives beginning in 2000.