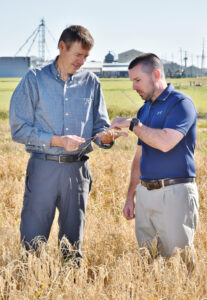 Don Groth, left, and Dustin Harrell examine rice in a field at the LSU AgCenter H. Rouse Caffey Rice Research Station. Groth is retiring as the station’s resident coordinator, and Harrell will assume that role — photo by Bruce Schultz/LSU AgCenter

Dustin Harrell will become the next resident coordinator of the Louisiana State University AgCenter H. Rouse Caffey Rice Research Station on Feb. 1, replacing Don Groth, who is retiring at the end of January.

Mike Salassi, AgCenter program leader for plant and animal sciences, made the announcement at the Louisiana Rice Research Board meeting Nov. 5.

“We are excited about Dustin Harrell becoming resident coordinator of the H. Rouse Caffey Rice Research Station,” Salassi said. “Dr. Harrell brings the research experience and leadership skills necessary to lead the outstanding faculty and staff at the rice station.”

Harrell has worked at the Rice Research Station since 2006 as a research agronomist. He became the rice specialist in 2015 with the retirement of Johnny Saichuk.

Harrell said he hopes to continue the station’s legacy of excellence.

“Since the LSU AgCenter Rice Research Station was first opened in 1909, research discoveries and innovations developed by scientists at the station have positively impacted rice production, not just in Louisiana, but globally,” he said. “I am honored and humbled to be able to provide leadership to the station moving forward.”

Groth started working at the station in 1983 as a plant pathologist. He replaced Steve Linscombe, who retired in 2017, as resident coordinator.

Groth earned his bachelor’s degree in botany from Eastern Illinois University, and his master’s and doctorate are from Iowa State University.

Salassi said Groth’s contribution to the rice industry has been considerable.

“Don Groth has had an exceptionally productive career with the LSU AgCenter,” Salassi said. “Over his career, his rice pathology research program has been highly productive, making a significant contribution to the economic viability of rice production in southwest Louisiana in particular and the state as a whole.”

“I have thoroughly enjoyed working with Dr. Groth as resident coordinator, and I think we were both able to help each other as we transitioned into our new roles,” Guidry said. “His commitment to ensuring that the station continued to effectively and efficiently meet the needs and challenges of the rice industry and his dedication to supporting the faculty and staff at the station made him very successful in that role. I certainly appreciate everything he has done in providing leadership for the station.”

Guidry said Harrell will continue Groth’s path of excellence. “I look forward to working with Dr. Harrell in this new role and feel certain that he will take those same qualities of dedication and work ethic that has made him a successful research and extension faculty member to his role as resident coordinator.”