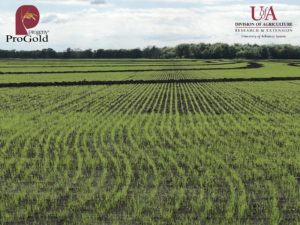 Erwin-Keith Inc. has named the two long-grain rice varieties it licensed from the University of Arkansas earlier this year. They will be marketed under the Progeny Ag brand and be called ProGold 1 and ProGold 2.

Under the agreement, the university’s Division of Agriculture’s Foundation Seed Program will produce foundation seed annually for the two long grains. Erwin-Keith Inc./Progeny Ag will purchase the foundation seed and grow certified seed from it for sale to rice growers.

ProGold 1, which the university was trialed as RU1701084, has a similar yield to LaKast. It was not released because it would have duplicated the advantages of Jewel, a long grain that the university recently released.

“But it is still a good variety for which a lot of testing has occurred, so it’s being made available for those who might want it,” university breeder Karen Moldenhauer said in a news release.

ProGold 2 was trialed as RU1701081. It is a very high-yielding variety but not much different from Diamond, which the university released a few years ago.

“Again, it’s a very good variety with lots of data, and it is also being made available to those who might want it,” Moldenauer said.

Some rice breeding lines are advanced right to the brink of release as public varieties, says John Carlin, director of the Arkansas Crop Variety Improvement Program.

But like RU1701081 and RU1701084, they are not released because they perform similarly to existing public varieties. They remain in the breeding program where they may offer genomic contributions to other breeding lines but are otherwise shelved.

Some of those lines, however, offer particular advantages for growers in some growing areas.

“We’ve decided to offer some of these breeding lines as commercially released varieties, under exclusive license to a single company, for two reasons,” Carlin said. “They offer growers more options in some parts of the state, and offering them for license helps recoup some of the investment we’ve made in advancing them to this stage of development.”

Developing rice varieties — which takes years of crossing, testing and advancing — is costly, Carlin said. Offering some advanced lines as commercial varieties to growers who can use them will help recover some of that cost.

The University of Arkansas contributed information to this article.