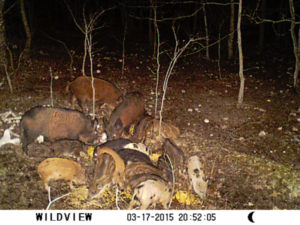 Wild hogs rooting around in Searcy County, Arkansas. Their populations have exploded across the state — photo by Skip Armes, University of Arkansas

Feral hogs continue to be a major problem in Arkansas, causing more than $19 million yearly to the state’s agriculture industry alone, according the Arkansas Department of Agriculture. In addition to crop losses, feral hogs damage pastures, destroy wildlife habitat, pollute water and transmit disease to livestock and, in rare cases, to people.

Feral hogs have been known to move into urban areas and damage parks, cemeteries, yards and gardens. In prior years, about 1,000 feral hogs were trapped under an Environmental Quality Incentive Program pilot program.

To help stem increased feral hog damage, four pilot projects are now underway in areas of Arkansas with excessive damage. The pilot projects are Ozark, Southeast, Southwest and Western River Valley. These projects are being conducted by APHIS Wildlife Services and NRCS in cooperation with the Arkansas Agriculture Department Natural Resources Division.

Two of these pilot projects – the Southeast and Southwest – are within the University of Arkansas at Pine Bluff’s Small Farm Program target areas. Funding is available for counties in Tier 1, with plans to include Tier 2 counties later.

Tier 1 counties in the southeast are Drew, Ashley and Arkansas. Southeast Tier 2 counties are Desha and Chicot. Southwest counties include Sevier, Howard and Hempstead. Pike, Clark and Nevada counties have been designated Tier 2 counties.

Producers in Tier I counties are eligible for assistance through the pilot project, which consists of three coordinated components: (1) feral hog removal by APHIS Wildlife Services, (2) restoration efforts supported by NRCS and (3) assistance to producers for feral swine control provided through partnership agreements with non-federal partners.

Funded by a $3.4 million U.S. Department of Agriculture grant in November 2019, the pilot programs will be in effect for three years.

“APHIS will provide technical oversight and coordination of the trapping program,” said Robert Byrd, APHIS Wildlife Services state director. “If producers sight any signs of feral hog activity, they can call me at (501) 835-2318.”

Signs of feral hogs include the following:

• Rooting or digging in search of food.

• Rubbing on trees after wallowing.

• Tracks in mud near springs, ponds and streams.

Direct control through trapping using wireless traps is the most effective way of removing feral hogs, Byrd said. It saves time and effort checking empty traps; and it targets catches, usually multiple hogs in a sounder or bachelor group. That is about 20-plus at a time.

Shooting a few does little to control them as they typically teach other hogs to avoid humans and become nocturnal, Dr. Henry English, head of the UAPB Small Farm Program, said.

“The cost of the traps make trapping costs prohibitive for landowners on a small acreage,” he said.

For help with feral hogs, producers can also report sightings, signs or damage to the task force by completing the Arkansas Feral Hog Sighting Report-Cognito form available online at https://www.cognitoforms.com/ArkansasAgriculture1/ArkansasFeralHogSightingReport.

The University of Arkansas Pine Bluff contributed this article.