A combine harvests second-crop rice at the Live Oak Farm in Vermilion Parish.

MS Farm Bureau Internship Opportunity
Mississippi Farm Bureau Federation (MFBF) is offering a summer intern program for students who carry at least 12 credit hours and have a minimum junior classification in an agricultural field of study for the 2015 – 2016 school year.

The salary is $2,400, and the purpose of the internship is to give students an opportunity to gain firsthand knowledge and an understanding of the role Farm Bureau plays in agricultural education, leadership and policy development.

The student selected for this program will begin June 1, 2015, and will work for a six-week period. The student will be based in Jackson at the state office of Mississippi Farm Bureau Federation, and an allowance for housing is being offered – $1,500 for the six-week period. Some travel will be expected; expenses will be paid for business travel. Applications must be received by Feb. 16, 2015.

Go to www.msfb.org to download an application and instructions for applying. For more information, contact Samantha Laird at (601) 573-7913 or slaird@msfb.org.

Rice Farming With Poppa
Kara Puryear, whose father, Mark Hargrove, is a rice farmer in DeWitt, Ark., says there is no better way to grow up than growing up as a rice farmer’s daughter.

“My dad (Poppa) has been the epitome of hard work, good character, commitment and dedication to not just a job but to a way of life,” Kara says. “When my sister and I were little, rice farming was putting on ‘work clothes’ and boots to ride in the back of the truck, play in the mud and find snakes and mice under levee gates. 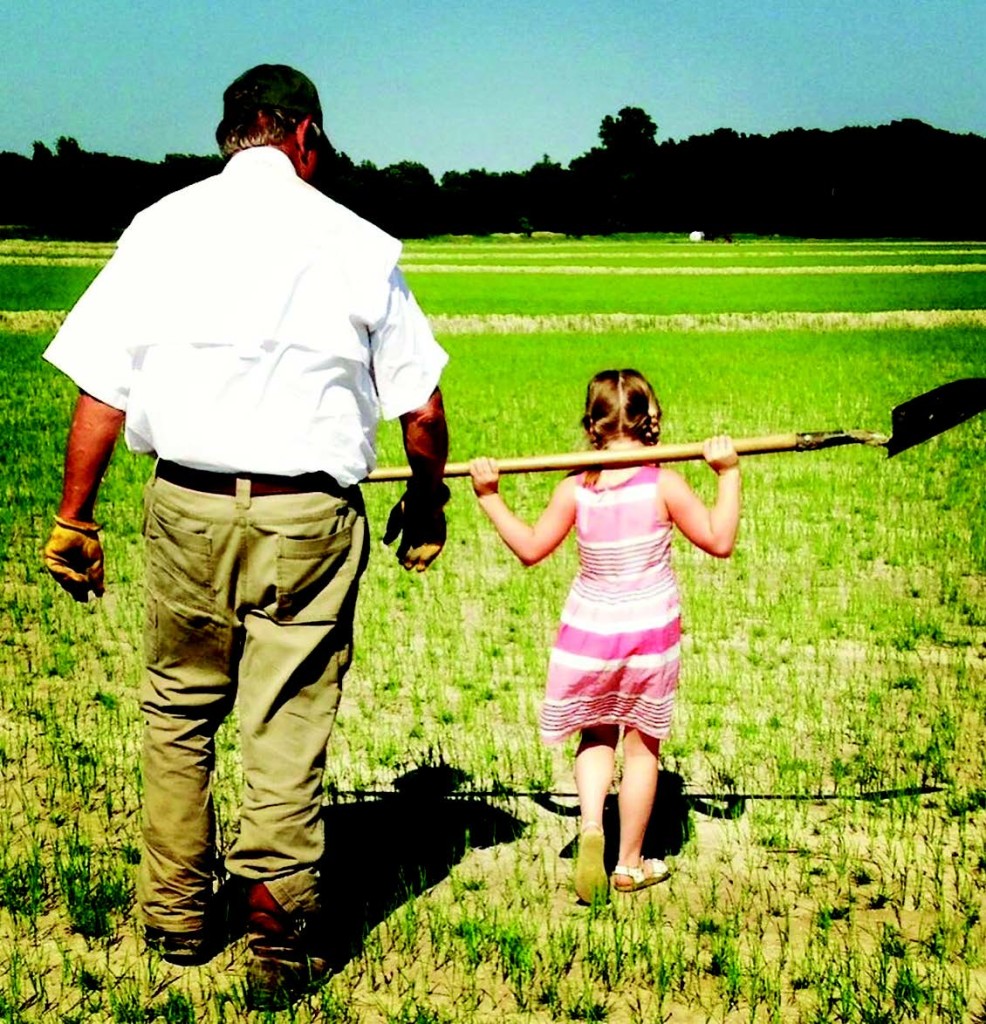 I was helping my dad with levee gates one afternoon and my niece tagged along after school. I snapped this photo of Poppa teaching Caroline how to farm rice.

“Now that I am older and work for my dad and brother-in-law Jim Craig, on the farm, I see there’s so much more to rice farming than play,” she says. “Managing employees, finances and daily routines (not to mention the unmanageable weather!) is a nonstop task of worry and stress, but my dad has instilled in me value and faith of life on the farm. Having been raised on a firm foundation of value and faith, I can comprehend the benefits of being a rice farmer’s daughter and have no doubt that my niece, Caroline, will too be instilled with these qualities, learning from her dad Jim and her Poppa.”

Dr. Parr Rosson, who heads the agricultural economics department at Texas A&M University in College Station, said there will be immediate increases in the amount of U.S. food exported to Cuba.

“Within a year to two years, we should see U.S. exports to Cuba return to the $400 million to $450 million range,” he said. “The combination of allowing up to a four-fold increase in remittances along with an increased role for U.S. banks may lead to a 15 to 30 percent increase in U.S. food exports.”

Currently, Cuban-Americans and others are limited to remittance of no more than $500 per quarter to persons in Cuba. Rosson said under the new program, that limit would increase to $2,000. Texas supplies Cuba with several export items, including chicken leg quarters and corn. Pork, cotton and dairy products produced in Texas are also exported there. More rice exports are also expected. A growing tourism market in Cuba has also sparked demand for items such as condiments, bottled water, beer, wine and spirits.

“These are products that we are seeing more interest in due to the growing tourism market in Cuba,” the economist noted.

Rosson said in addition to allowing U.S. and other travelers to use credit cards, this will boost demand for foods.

Workshops have previously been conducted to assist educating producers on export trade with Cuba, partnering with the Texas-Cuba Trade Alliance and Free Trade Alliance.

Louisiana Ratoon Crop Called ‘Outstanding’
Former LSU AgCenter rice specialist Johnny Saichuk said this year’s second rice crop in south Louisiana was outstanding. No records are kept for second crop yields, but Saichuk said it was not uncommon to hear of farmers cutting 20-30 barrels an acre. Years ago they only managed 5-10 barrels. Each barrel equals 162 pounds of rice.

Mild fall weather with good sunshine helped rice regrow after the first harvest. Even medium grain varieties, which typically are not high yielding for second crop rice, had good results, he said.

Farmers are treating the ratoon crop as an important part of their growing season. “You hear more people making a commitment to do things on time,” Saichuk said. “A lot of people realize they need the volume to make money.”

Heavy rains after the first harvest meant farmers didn’t have to pump as much water for the second crop.

Steve Linscombe, director of the LSU AgCenter Rice Research Station, said some farmers had their best second crop ever. With a good first crop and an excellent second crop, Louisiana’s overall harvest is close to last year’s record crop, he said. Farmers have treated the ratoon crop as a bonus in years past, but many are starting to manage
the second crop better.

“I think our producers these days understand that if they manage the second crop as well as the first crop, they’ll see the dividends,” Linscombe said. “But a second crop will remain risky because of the chance of an early fall frost or a late season hurricane.”
Blackbirds also were a problem for the second crop in some areas because the rice was slow to develop.

For more information, including the 2014 Farm Bill, please visit:
http://extension.missouri.edu/scott/agriculture.aspx.